Published on March 16, 2022 by Laura Lee Caum and Harrison Pike   Share this on: 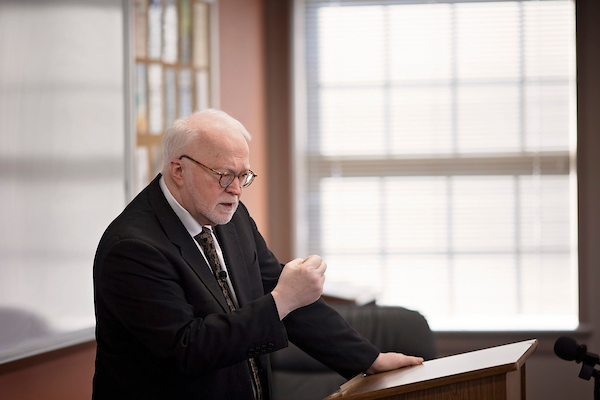 George was the founding dean of Beeson Divinity School. He has authored more than 20 books and serves as a life advisory trustee of Wheaton College. In a two-part lecture, he focused both on martyrs and scholars throughout the history of the Christian church.

George’s lecture focused on the integration of faith and learning, highlighting the Great Tradition of the Christian church, which he defines as the body of wisdom found at the heart of all orthodox forms of the Christian faith. “It is summarized…in the great creeds and confessions of the church, which focus on the core beliefs of the Christian faith,” said George. He went on to describe how the Great Tradition informs everyday living, acting as “guard rails that keep us safely focused on the road while negotiating the twists and turns of the dangerous mountain pass.”

This Great Tradition, George asserted, has been present throughout Christian history and has been shaped by continuous study of the Bible. For him, scholarship and learning are necessary for the growth and refinement of faith. He cited Christian scholars such as Boethius, Cassiodorus, Bead, C.S. Lewis and T.S. Elliot as examples of this combination of faith and reason.

George ended his lecture with a call to action: “Do something right and good and trust that God will honor it and use it for the blessing of others. That too is part of the inheritance we have from these great figures and so many others, that we call the Great Tradition.”

The Robbins Lectureship was established in 2008 to honor the memory of the Rev. Dr. Ray Frank Robbins (1915-2003), who served as a professor of religion at Samford University (then Howard College) from 1946 to 1952. For the next 29 years he was professor of New Testament and Greek at New Orleans Baptist Theological Seminary. After retirement he taught for an additional 14 years at his alma mater, Mississippi College. He authored many books on the Bible, particularly the Book of Revelation.