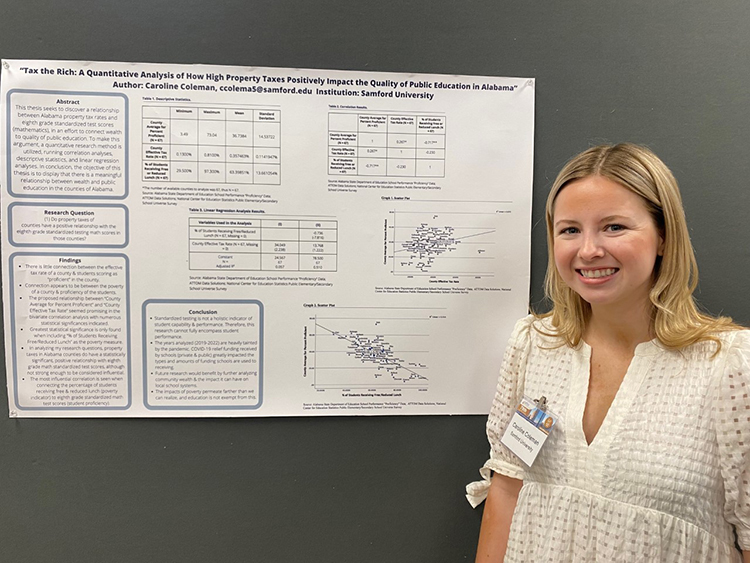 Coleman has broad interests in politics, public affairs, research and analysis, but is generally aiming toward a career that will build on the knowledge and skills she developed at Samford. For her senior thesis she researched public education in Alabama to see if there was a connection between a county's property tax rates and the student performance in the county schools. The research, mentored by professors Marissa Grayson, Randolph Horn, and Serena Simoni earned her an invitation to present a poster at the annual conference of the Midwest Political Science Association in April.

“It was such a neat experience getting to be around great academics and professionals in political science,” Coleman said. “I loved getting to talk about my research with people at the conference, because it's something I really poured a lot of time and energy into, and it isn't something the average person wants to talk with you about.” She will present the work again at the April 22 Samford Student Research Colloquia hosted by Samford’s Office of Research.

"I am genuinely so grateful to the Political Science Department at Samford for how it's pushed me over the past four years,” Coleman said. “I have grown tremendously under the guidance of amazing professors who truly challenge their students and want to see them succeed. Samford is lucky to have such driven and exceptional professors who not only teach their students, but mentor them outside of the classroom. My professors have pushed me to seek out internships and opportunities that I otherwise would not have considered myself qualified for. Additionally, the research I have been able to complete under Dr. Simoni is something I am so proud of, and something I know I'll be able to reference for years to come in my career."