Published on April 4, 2022 by Math and Computer Science Department   Share this on: 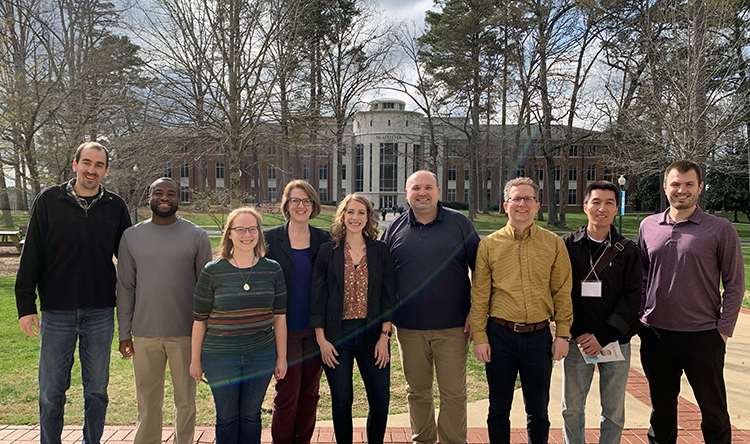 Antwi-Fordjour gave a contributed presentation on "A modified Lotka-Volterra predator-prey system." In this talk, Antwi-Fordjour disproved some claims about the global existence of positive solutions made by Pal et al. (2017). He showed analytically that their claim and proof are totally flawed and he corroborated his findings with robust numerical simulations. He also cautioned against claiming global existence of positive solutions when the response function involved is non-smooth. He concluded his presentation with the ecological significance of his results.

Awtrey gave a contributed presentation on "When is a field defined by a reciprocal polynomial?," which is joint work with Samford undergraduate Gwynnie Hornibrook. Their project focuses on solutions to equations involving reciprocal polynomials; that is, the solutions come in reciprocal pairs. They have developed new theoretical and computational techniques to determine when a given polynomial equation can be transformed into a reciprocal one while also preserving the symmetry properties of the solutions. As an application, they have applied their techniques to develop simple criteria for computing the symmetry properties of such polynomial equations, thereby generalizing and extending several recent results in the literature.

In her role as the Southeastern section's representative to the MAA congress, Hynds updated conference participants on news from the national office and introduced one of the plenary speakers, MAA president Jenny Quinn.

In his role as the Alabama State Director for the MAA Southeastern section, Patane reported to the executive committee about the 2022 Alabama state dinner that was hosted at Samford. Further, he attended business meetings for two section committees on which he serves: the teaching award committee and nominating award committee. Patane also served as a judge for the undergraduate poster session at the conference.

Powell gave a presentation titled "This....Is....Math Jeopardy!" for the Happy Hundredth: Celebrating the Southeastern Section Centennial session. In his talk, Powell outlined the history and highlights of the section’s Math Jeopardy competition. The competition, in which teams of undergraduates compete by answering an assortment of mathematical questions, has been a highlight of the yearly conference for nearly twenty years. Powell was asked to give the presentation due to his work as a question writer for the competition for over a decade.

In addition to serving as a judge for the undergraduate poster session, Sun gave a presentation of his paper "A Principle Weighted Penalized Regression Model and its Application," in which a new principle weighted penalized regression model that can be used for reducing the dimensionality of large data without losing important information is introduced. It retains the favorable features of the principal component analysis (PCA) technique and penalized regression models. The new model weighs the variables in a large data set based on their contributions to key principle components obtained by PCA, which improves its ability to discover hidden correlated variables, and does variable selection and regression coefficients estimation simultaneously via regularization methods. An application of the proposed model on high-dimensional economic data is studied. The results of comparative studies show that the new model outperforms the competitors with significantly smaller fitting and prediction errors. The resulting model presents high accuracy and is easy to interpret.