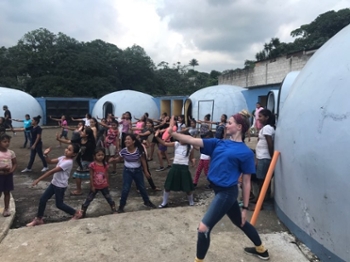 From New York to England, Arts in Mission Scholarship students spent the summer integrating their artistic skills and passion for missions. Thanks to scholarship dollars provided by Samford’s School of the Arts, Julie Ramsey, Anna Johnson, Jackson Vaughan and Abigail Williams, not only earned professional experience, but also built community relationships in faith.

Ramsey, a graphic design major, worked in New York as a graphic design intern with NBC. She was selected for the position out of a pool of 50,000 applicants. She combined the opportunity with volunteering and living at Urban Nations Outreach, a community development ministry focused on reaching New York’s immigrants and underserved communities.

“I am thankful for the graphic design leaders at NBC who mentored me and for all the people I taught ESL. After this summer, I am more confident in my abilities as a professional and as a Kingdom ambassador.”

Theatre for youth major Johnson returned to Haiti to work with at the Children of Christ Home.  She has devoted several summers to working with this organization teaching children.

“I was able to serve in the local church leading kids’ and youth clubs and in schools teaching religious education lessons,” he said. “I was also given the opportunity to lead worship on multiple occasions. It was so impactful to spend a summer building relationships with the local community and sharing the gospel through music, teaching, and footballing.”

Williams, a sophomore musical theatre major, traveled to Palin, a small village outside of Guatemala City, Guatemala. She worked in a middle school with no electricity and that only recently gained access to running water.

“In the afternoons, I was able to lead a dance class for the girls at the school. I choreographed a worship dance to a Spanish version of Lauren Daigle’s Light of the World and taught it to them through a translator while we danced on the dirt. It was a really moving experience because dance has no language barrier and dance is something that these girls have never gotten the opportunity to try.“

Currently enrolled Samford students are invited to apply for an Arts in Mission scholarship. Qualified students should be prepared to offer a written proposal describing their mission project, how the arts will be employed, and how their work will serve the Church and reach people for Christ.