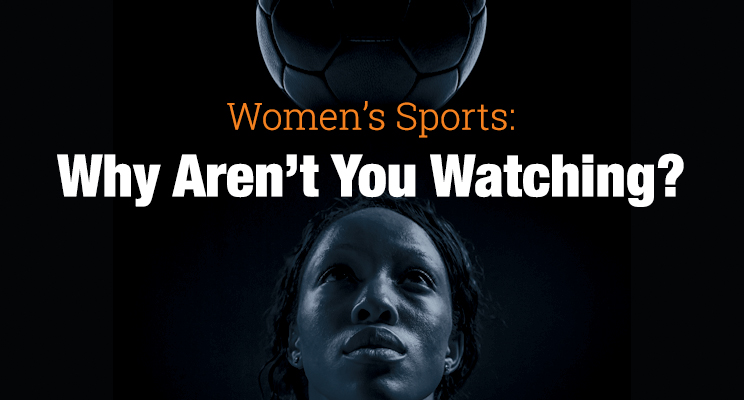 Samford University’s Center for Sports Analytics, in partnership with Tigris Sponsorship & Marketing, has completed a study that takes a holistic look at the collective and individual reasons that sports fans may or may not watch women’s sports and aims to provide pathways for improvement. The study has attracted the interest of many sports business media and, in August 2021, was publicized by the Sports Business Journal, the popular international outlet that equips the most powerful sports business executives with industry news and data.
Through market research and numerous surveys, the study “Women’s Sports: Why Aren’t You Watching?” developed by Darin White, the center’s executive director, and Matt Yonan, Tigris president and founder, first uncovers three key persistent issues that keep sports fans from watching women’s sports: a perception that they’re not “entertaining and fun,” an audience limited by connections to the sport, and an inconsistent presence on TV.
The study then continues to address how to drive viewership for women’s sports, noting that “now is the time” and that every entity has a role to play in changing the game for recognition of women’s sports. Those entities include groups such as marketers, sponsors and sponsorship agencies, broadcasters and media outlets, women’s and men’s leagues and teams, athletes and their agents, and more.
In addition to gathering data through surveys, White moderated virtual panel discussions of sports business experts in which they discussed the survey findings and next steps that should be taken to increase interest in women’s sports. Panelists included Lindsay Barenz, vice president of business development for the National Women’s Soccer League; Catherine Carlson, senior vice president of revenue and strategy for the Philadelphia Eagles; Dina Gerson, former director of Olympic partnership marketing at The Coca-Cola Company; Jill Gregory, executive vice president and general manager for Sonoma Raceway; Kathy Kayse, media and advertising executive and chair of the Board of Directors of the Women Sports Foundation; Jessica Knadle, vice president of client services and insights for Tigris; Abraham Madkour, executive editor of the Sports Business Journal; John Mount, vice president of sports marketing and region assets for The Coca-Cola Company; Mallika Pereira, vice president of partnership marketing for Major League Soccer; Neil Pilson, former president of CBS Sports; and Alisha Valavanis, chief executive officer and team president of the Seattle Storm and Force 10 Sports Management.
Sports Business Journal published “Higher profile, better broadcasts a key to increasing interest in women’s sports” in their Aug. 9, 2021, weekly issue.
While a partner in the study, Yonan also serves as a member of the Brock School of Business Sports Marketing Advisory Board, a mentoring board of the school's sports marketing program.
“When Matt and the Sports Business Journal expressed an interest in partnering with us on a major national study looking at growth strategies for women’s sports, we jumped at the opportunity,” White said. “The Sports Business Journal is the ‘Wall Street Journal' of the sports industry. Since the article published, we have had numerous sports properties reach out to us requesting student interns including the L.A. Dodgers!”
White also serves as the founding director and program coordinator of the sports marketing program. As part of the study, female sports marketing students were able to provide their own contributions which further displays the center’s priority of being an agent of change for women’s sports. Over the last few years, the program has helped launch sports business careers for several female graduates including placements at the Houston Texans, ESPN and Birmingham Legion F.C.
White said, “Our female sports marketing students have participated in the prestigious espnW Summit NYC which focuses on driving change and impact in the women in sports space. Thus, we have made a strong commitment to be an agent of change across sports and entertainment.”
Read the Sports Business Journal article here.
Read the full study here.
Samford is a leading Christian university offering undergraduate programs grounded in the liberal arts with an array of nationally recognized graduate and professional schools. Founded in 1841, Samford is the 87th-oldest institution of higher learning in the United States. The Wall Street Journal ranks Samford 1st nationally for student engagement and U.S. News & World Report ranks Samford 66th in the nation for best undergraduate teaching and 104th nationally for best value. Samford enrolls 5,683 students from 47 states and 19 countries in its 10 academic schools: arts, arts and sciences, business, divinity, education, health professions, law, nursing, pharmacy and public health. Samford fields 17 athletic teams that compete in the tradition-rich Southern Conference, and ranks 6th nationally for its Graduation Success Rate among all NCAA Division I schools.
Marketing and Communications Manager
Morgan Black
mblack3@samford.edu
205-726-4753