A Narrative of Luck and Roots 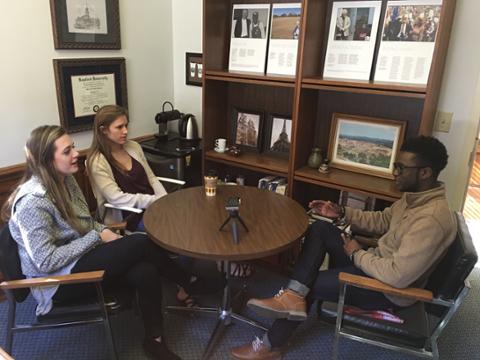 In this podcast, students Jenny Cockerham and Jessica McKee interview fellow student Oliver Barreau, a Haitian immigrant who moved to the United States as a child. With his feet in two different worlds, he describes his experience growing up in Haiti, New York City, and Birmingham as well as finding his identity.

Oliver tells how he and his sister were born in New York and then his family moved back to Haiti after his birth.
Play Segment

Oliver sums up the years he lived in Haiti.
Play Segment

Jenny and Jessica discuss the political unrest in Haiti in the 90s and 2000s. Oliver talks about how this unrest impacted his family.
Play Segment

Migrating to the US - Integration in New York

Oliver tells how his family migrated to the United States to live in Brooklyn. He discusses how he and his sister adapted to the culture.
Play Segment

Moving from New York to Alabama

Oliver talks about how the move to Alabama from New York was a greater challenge for him and how he adjusted there.
Play Segment

Being Haitian in Alabama Schools

Oliver relates his experiences in Alabama schools as a Haitian.
Play Segment