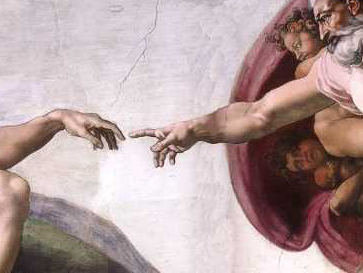 Haught, a noted Catholic scholar of science and Christianity, is the author of 19 books, including Science and Faith: A New Introduction, Making Sense of Evolution: Darwin, God and the Drama of Life, God and the New Atheism: A Critical Response to Dawkins, Harris, and Hitchens, and Christianity and Science: Toward a Theology of Nature. He spoke on the subject of "Evolution and Faith: What is the Problem?" at a packed morning convocation in Reid Chapel.

Haught began his talk by noting that in the last decade an international survey by Science magazine found that the U.S. was next-to-last in the percentage of the population that believes that humans developed from earlier species (40 percent to Turkey’s 27 percent). From the “Monkey Trial” in the last century to Kitzmiller v. Dover Area School District in this one, Americans are almost uniquely uncomfortable with the science of evolution.

“So what’s the problem?,” Haught asked. “Why is there so much fuss about evolution?” He said that, to many believers, nothing less than the existence of a creator is at stake. “If natural selection is the cause of living diversity and design and the wonders of life, what place is there for a creator?,” he asked.

Haught answered that question pretty neatly, and in under an hour, by describing Darwinian evolution and religious belief not only as compatible but as inextricably linked. “Divine providence and wisdom, instead of being contradictory to evolution, actually underlie evolutionary processes,” he said.

That is not to suggest that Haught is a proponent of the Intelligent Design (ID) movement. Early in his address, Haught displayed a map showing the many areas of the U.S. where activists have recently attempted to ban or undermine the teaching of evolution in public schools. The 2004 decision of the public school board of Dover, Pennsylvania, to allow teaching of the inherently religious ID content alongside science led to a landmark lawsuit in which Haught participated as a witness for the plaintiffs.

The school board defendants in Kitzmiller v. Dover, like ID activists elsewhere, advocated presenting both science and ID and letting children decide which to believe. “This struck many scientists as comparable to asking the kids to decide between chemistry and alchemy, between phrenology and neurology, between magic and physics, or between astrology and astronomy,” Haught said.

The judge in the case famously decried the “breathtaking inanity” of the school board and ruled that its decision violated the establishment clause of the 1st Amendment of the U.S. Constitution. For his part, Haught testified that ID is “not good science and, even more, not good theology.”

Haught returned to the subject of ID later in his lecture, as he weighed the complexity and “deep time” of evolution against the idea of a readymade universe. “The God of the Bible is, above all, a god who makes and keeps promises,” Haught said. “But what is a promise if not something that opens up the future?” The idea of design, he said, suggests a finished and frozen universe without freedom or promise, and denies the drama of a creator who “participates fully in the struggle and survival of life.”

“It seems to me that those who are fixated on design rather than promise are almost in a tantrum-like way demanding, “I want lucidity right now!,” Haught said. He compared that impatient demand to the abrasive rigidity of “new atheism,” a subject he addressed later that evening at Samford.

Speaking of impatience, Haught noted that the deep time of the universe–including the many billions of years preceding even the simplest forms of life—presents special problems for those who believe that modern human life was a creator’s goal. He said that if one thinks of the 13.8 billion-year old universe as a library containing 30 volumes of 450 pages each, with each page representing one million years, then human ethical aspiration and faith are low down on page 450 of volume 30.

Why would a creator take so long to get around to the point of creation? Haught sees in that period a creator’s “concern for the independence of creation” and, perhaps, divine love of a good story.

Haught touched on some scientific and theological problems that continue to trouble him–notably the problem of suffering, which he said troubled Darwin, too. But for all of the fuss over the subject of religion and science in this country, Haught made reconciliation look quite simple. “I find, as someone familiar with evolution,” he said, “that accepting evolution is quite compatible with looking upon nature as promise rather than as fixed design”.

Learn more about The Samford University Center for Science and Religion
Samford is a leading Christian university offering undergraduate programs grounded in the liberal arts with an array of nationally recognized graduate and professional schools. Founded in 1841, Samford is the 87th-oldest institution of higher learning in the United States. The Wall Street Journal ranks Samford 1st nationally for student engagement and U.S. News & World Report ranks Samford 66th in the nation for best undergraduate teaching and 104th nationally for best value. Samford enrolls 5,683 students from 47 states and 19 countries in its 10 academic schools: arts, arts and sciences, business, divinity, education, health professions, law, nursing, pharmacy and public health. Samford fields 17 athletic teams that compete in the tradition-rich Southern Conference, and ranks 6th nationally for its Graduation Success Rate among all NCAA Division I schools.