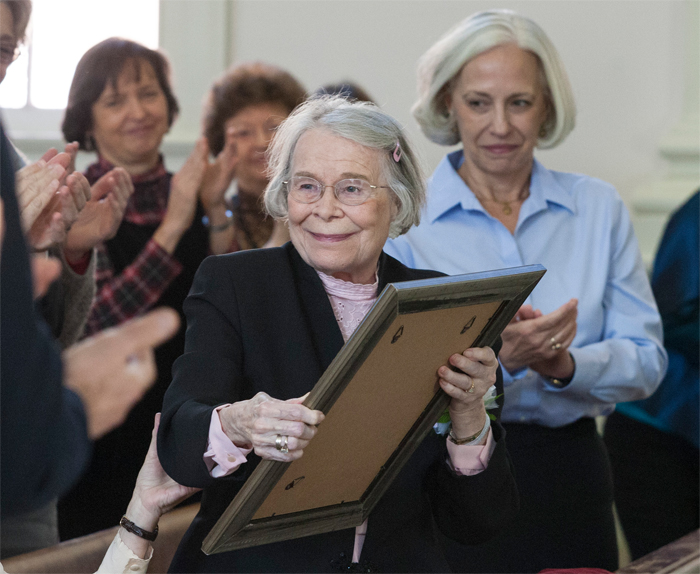 Samford University is remembering distinguished alumna and longtime professor Grace Weeks Márquez ’42 after her passing on Sunday, May 3. "Grace Márquez was national Spanish Teacher of the Year, mentor to dozens of faculty and over a thousand students, as well as loved by all who knew her," said World Languages and Cultures chair Mike Ledgerwood.

The Clanton, Ala., native first taught Spanish language at Samford from 1955-1970 and returned in the late 1980s. She was nationally-respected Spanish educator, department chair and founder of Samford’s first language lab in the 1960s. Her decades of teaching also included Birmingham-Southern College, schools in Mexico, Birmingham’s Baptist Church of the Covenant and a number of other institutions.

When Samford’s Department of World Languages and Cultures dedicated its Grace Márquez Language Technology Forum in 2013, friends, colleagues, family and former students told the story of her profound and ongoing influence on several generations of language students.

“My greatest joy as a teacher is when I look around and know that there are still many, many students who are learning the language that we who believe in Spanish think is spoken in heaven,” Márquez said when she rose to acknowledge the honors on that occasion.

Visitation will be 5-7 p.m. Friday, May 8, at Johns Ridouts, Southside Chapel (time to be determined).

Family-only graveside services on Saturday, May 9, will be followed by a public memorial service at Baptist Church of the Covenant at 1 p.m.


Samford is a leading Christian university offering undergraduate programs grounded in the liberal arts with an array of nationally recognized graduate and professional schools. Founded in 1841, Samford is the 87th-oldest institution of higher learning in the United States. The Wall Street Journal ranks Samford 1st nationally for student engagement and U.S. News & World Report ranks Samford 37th in the nation for best undergraduate teaching and 97th nationally for best value. Samford enrolls 5,758 students from 48 states and 22 countries in its 10 academic schools: arts, arts and sciences, business, divinity, education, health professions, law, nursing, pharmacy and public health. Samford fields 17 athletic teams that compete in the tradition-rich Southern Conference, and ranks 3rd nationally for its Graduation Success Rate among all NCAA Division I schools.