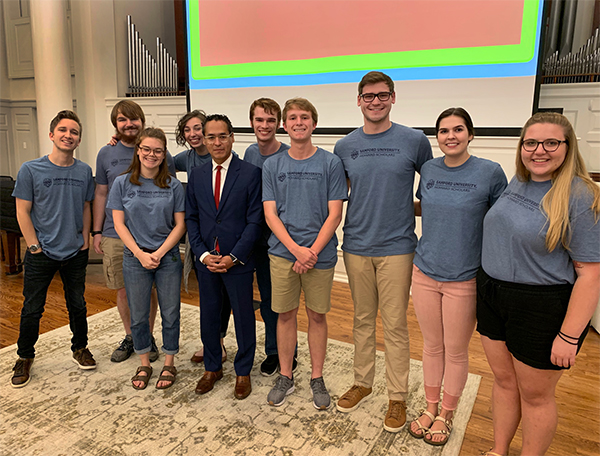 The words “human,” “liberal,” “education” and “freedom” carry heavy cultural baggage. Combining them in a single lecture on Liberal Education and Human Freedom requires a clear definition of terms, and few American scholars are more qualified to do that than Roosevelt Montás, presenter of Samford University’s 2019 J. Roderick Davis Lecture.

The annual lecture, established in honor of former Howard College of Arts and Sciences dean Rod Davis, brings to Samford leading scholars and public intellectuals who can enrich Samford's commitment to liberal arts education. Montás, an American literature scholar at Columbia College and former director of the college’s Center for Core Curriculum, addressed that commitment directly in his Oct. 10 address.

Montás described the “cognitive revolution” that began to distinguish intellectually modern humans from other mammals approximately 50,000 years ago. The spark of self-awareness that compelled humans to think beyond survival to existence, Montás said, mixed with aggressive and cooperative urges to establish the dominance of the species.

Montás cited the Trojan War—with the associated growth of western literature via the Iliad–and the rise of Athenian democracy as further intellectual milestones. The burden of responsible citizenship, in particular, created a question about what kind of education best serves democracy and personal freedom, Montás said, and the Greeks’ answer was to exploit the citizen’s individual freedom and intelligence by learning everything from warfare to ethics, finance to philosophy. By contrast, to the Greeks’ way of thinking, slaves need know only how to achieve the task set for them.

Montás said the Greek judgement of who is or isn’t worthy of liberal education prevailed even in the young United States, where slave-turned-statesman Frederick Douglas recalled that he was denied literacy because his owner understood that reading would “forever unfit him to be a slave.” “From that moment I understood the pathway from slavery to freedom,” Douglas wrote.

Today, Montás said, people suffer other forms of bondage, including slavery to individual desires and greed, and to systems that demand most of a worker’s life in return for wages. Professional skills and economic stability are important, Montás acknowledged. But, he said, “It’s not right that college should just be about preparing you to sell some portion of your humanity for wages.”

The liberal arts are an expression of a higher calling in education, Montás said. “Liberal education is that portion of your education due to you, from us, simply by virtue of your humanity, the part of your education that sees you not as a professional in the making, but simply as a whole human being, and that tries to equip you to face that condition in all its mystery and complexity.”

“In most disciplines, the subject to be learned is at the center,” Montás observed. In the liberal arts, he said, “the student—the individual as a living and growing entity—is at the center,” and the “inner transformation and development” of the student is the goal. “What a student gets from a liberal arts education should be, ultimately, a clearer vision of themselves, a set of mental habits and dispositions that will enrich their lives regardless of their career paths,” Montás said.

That idea is the heart of core curriculum programs like Columbia’s and Samford’s, and explains the participation of all students, no matter their professional aims, as Samford geography professor Jennifer Speights-Binet noted in her introduction to the lecture. “You cannot get a Samford degree without investing in the Samford Core Curriculum,” she said. “Wherever you are, whatever text you’re reading, you are participating in a rich tradition of reading significant texts in philosophy literature, and theology–texts which challenge us to ask what it means to be human, how best to live, and how best to live together.”

Addressing many of those first-year Samford Core Curriculum students assembled in Reid Chapel, Montás offered assurance that the experience is not just a box to check on the way to a career. “If you pursue your liberal education honestly and openly—that is, with intellectual integrity—it will transform your life and open your horizons in ways that you can’t imagine, and will make you a deeper, more authentic and awake human being.”