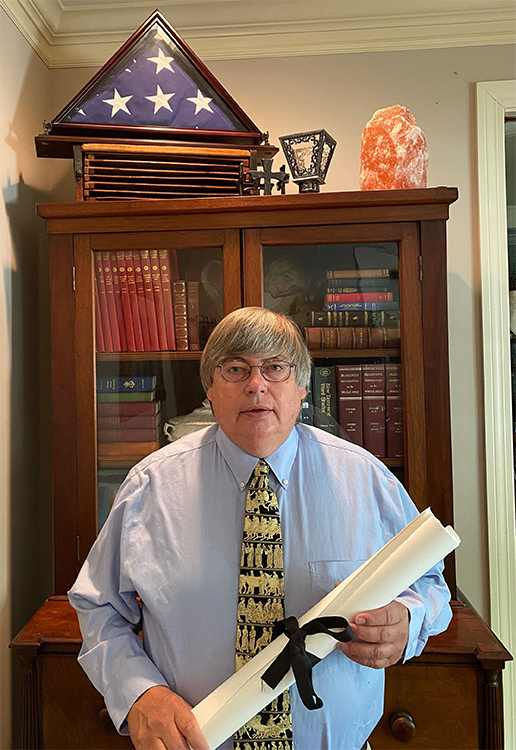 Randy Todd with his Ovatio

Samford’s Department of Classics and Philosophy was set to host the annual meeting of the Classical Association of the Middle West and South (CAMWS) in March, but COVID-19 required cancellation of that plan. The organization met virtually in late May instead, with essential support from Samford’s faculty for that unprecedented effort.

CAMWS expressed thanks for the Local Committee’s years of preparation for a Birmingham event and offered special praise for Randy Todd, chair of Samford’s Department of Classics and Philosophy. In recognition of Todd’s long service to CAMWS, the organization honored him with one of three 2020 Ovationes–recited and written Latin citations presented by distinguished colleagues and later published in the Classical Journal. Orator David White, a classics professor at Baylor University, presented Todd’s Ovatio during the virtual meeting.

Todd served as chair of the Baylor department and directed the Baylor Interdisciplinary Core before leading Samford’s department. He has lectured and taught in more than a dozen countries, including travel programs with students to Italy, Greece, England, France, Turkey, Syria, Jordan and Israel. Todd's research interests have gravitated toward the beginning and ending of classical antiquity, on archaic Greek literature and history, especially on military and political organization from the end of the Bronze Age through the rise of the polis, and on classical culture and the rise of Christianity, especially the language and context of the New Testament.

"The Samford students, faculty, staff, and administration have allowed classics to thrive here over the years and to provide leadership and influence that extend beyond the state and region, and in the process they made me look pretty good," Todd said. "I am grateful to all who have supported our efforts, and who deserve their share of this great honor."