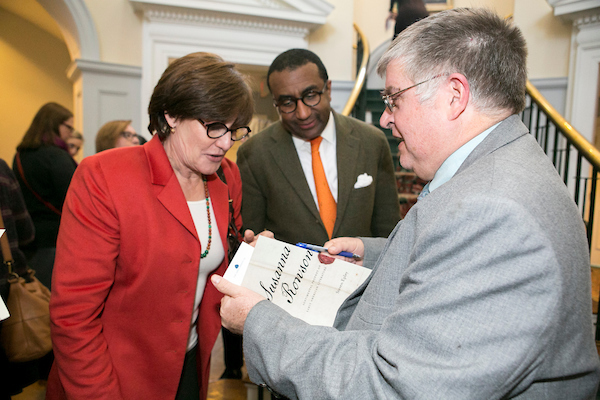 Steven Epley, right, autographs copies of his book on Rowson at a 2017 reception

Samford University English professor Steven Epley has been invited to write the introductory essay for a forthcoming edition of the  Early American Reprints series.

Early American Reprints is a nonprofit publisher dedicated to the recovery of early American texts of scholarly value. Its new edition will include two novels–The Inquisitor, or Invisible Rambler (1788) and Rebecca, or the Fille de Chambre (1792)–by Susanna Rowson, America's first best-selling author.

Epley is the author of several articles on Rowson as well as the book Susanna Rowson: Sentimental Prophet of Early American Literature. At a 2017 reception honoring the book, Epley said he first read Rowson’s Charlotte Temple as a graduate student, and found in the author’s life elements of his own family’s history. “Like my dad, who grew up in hardscrabble frontier Arkansas with six younger siblings to raise virtually single-handedly once his mother died, Rowson cared for her distressed family when they were put under house arrest in the Revolutionary War,” Epley said. “Like my mom, Rowson had to battle the discrimination faced by women in her time.”

Epley said he also finds in Rowson’s works a unique use of religion to address sexism, racism and inequality. “Her responses to vexing early American social issues are shaped by notions of righteousness, justice, covenant accountability, mutual obligation, and personal loyalty drawn from the Old Testament, especially the prophets.”

Epley earned the 2002 William J. Calvert Prize for Literary Scholarship, presented by the Association of College English Teachers of Alabama, for an essay on Rowson. He earned the 2017 Faculty Research Award from Howard College of Arts and Sciences. In 2018 he served as Scholar-In-Residence at Medford, MA, Historical Society and Museum.