Opened to Exploration, Overby Created Her Own Niche 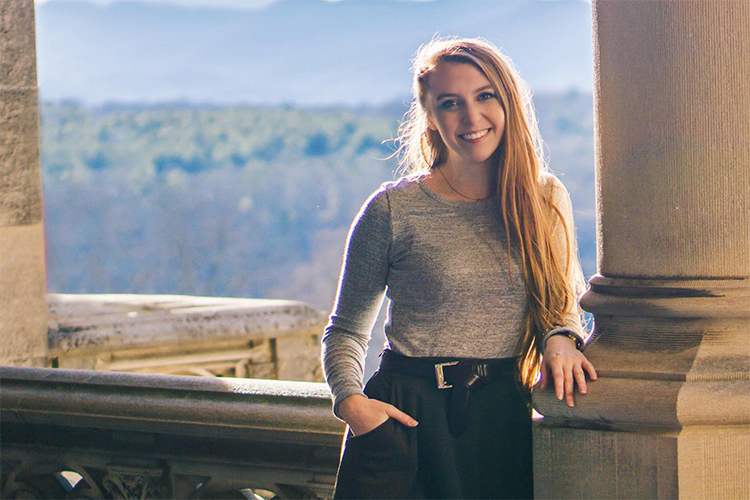 Sarah Overby ’15 came to Samford aiming in the direction of engineering physics, but found that it was not quite what she wanted to do. Computer science was closer, but a bioinformatics course reminded her how much she enjoyed biology. Then there was Spanish, another longtime interest. “I felt lost if I didn’t have my Spanish class on my schedule,” she said.

Study experiences in Costa Rica and Spain convinced Overby that language was more than a side interest. Being immersed in other cultures, without the option of speaking English, also convinced her that she could thrive in unfamiliar settings in spite of the inevitable awkwardness and fear. “You realize you’re so much more capable than you think,” she said, reflecting on that transformative experience.

Encouraged by faculty mentors Lynda Jentsch and David Johnson, Overby declared a Spanish major but kept a biology minor and packed her schedule with more science courses and research experience than required, not merely finding her niche, but creating it. “This feels like me,” she decided. “This feels like home.”

Overby understands now that “knowing what you don’t want to do is as important as knowing what you do want to do,” but as a senior she wondered what employers would think of her interdisciplinary exploration. An internship in the Drugs Chemistry Lab of the Tennessee Bureau of Investigation (TBI) brought new opportunities for learning as well as a full-time job as a forensic technician, and confirmed the value of her choices.

When the TBI showed special interest in her language skills, Overby realized she should be highlighting her Spanish major and cultural experiences even when applying for jobs and graduate programs in science fields. She believes that emphasis was a key factor in her acceptance to University College Dublin, where she earned a Master of Science in Biological and Biomolecular Science with a concentration in  genetics and cell biology. “They could see how I could make connections between two very different disciplines,” she said. The application process also brought a moment of self-discovery. “I realized that I just love languages,” she said, “and genetics is just another language–it has its own meaning and syntax and semantics and grammar.”

Overby said her intercultural experiences also proved to be valuable in the diverse group of international students in Dublin. She saw them struggling with a new language and culture in the same ways she had struggled in her first international experiences, and gave them the gifts of patience and encouragement that had transformed her fear into opportunity. “I knew how it felt to not know what you’re trying to say or how to get it out of your mouth,” she said.

Genetics research in Africa created even more opportunities to combine scientific and cross-cultural interests, and to build the kinds of relationships that led Overby to her next adventure. Prospects for funding a Ph.D. degree in Europe seemed dim, and she was thinking of returning to the U.S. when a longtime friend from her semester in Spain told her about an opening in a Ph.D. program at the University of Valencia. “It was exactly what I was looking for” in terms of scientific challenge, Overby said, but she was surprised again by how much her interviewers valued her language skills. They found her uniquely equipped to help research the Myotonic Dystrophy genetic disorder in their Spanish lab and effectively communicate the research in English, the universal language of scientific publication.

While still working in Valencia, Overby was invited to spend three months as an Academic Visitor at the University of Oxford this spring, and was reminded how important it is for students to explore and take risks in order to grow. She said any of her Valencia colleagues could have pursued the Oxford opportunity but they were intimidated by the language barrier. “That’s such a shame to me, because I know exactly how that feels, to be scared.”

Waiting out that pandemic back in her native Nashville, Tennessee, Overby prepared a research article for publication, sought a way to help with local COVID-19 testing, and remained hopeful that she would soon be able to return to her studies in Oxford and Valencia. She learned, long ago, to look over the horizon, past the strangeness and fear of new experiences. As she assured a new generation of Samford explorers in a visit to campus last fall, “This is a skill you take with you your whole life–It will open so many more doors for you if you can get over that fear.”