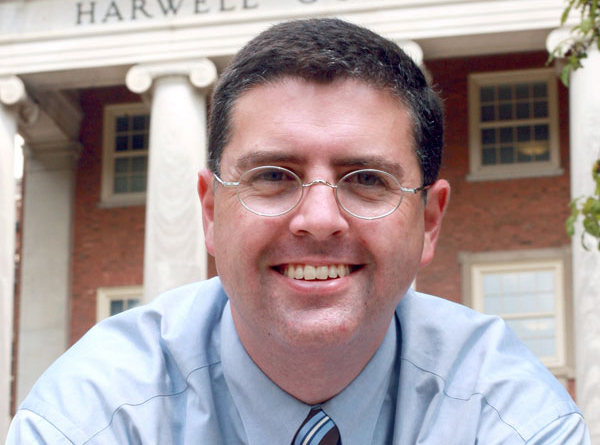 Jason Wallace, Richard Stockham Jr. Chair in Western Intellectual History and director of the Core Texts Program in Howard College of Arts and Sciences (HCAS,) received the John L. Buchanan Award for Excellence in Classroom Teaching in Samford University’s opening convocation Aug. 25. The recipient of the award is selected by a faculty committee through a process using nominations provided by graduating seniors from the class of 2020.

Samford provost Mike Hardin presented the award and read a portion of a nominating testimonial:

“Dr. Wallace understands the importance of studying history while keeping in mind the place from which it came. He uses metaphors and humor to constantly present history that sometimes seems far removed in the past, and connects it to the present day. Dr. Wallace’s teaching helped me see the value of discussing ideas, to consider how ideas themselves shaped the world, and to think about how my faith as a Christian is strengthened by intellectual discovery.”

Wallace's research has addressed the relationship between religion and politics in the 18th and 19th centuries. He is the author of Catholics, Slaveholders, and the Dilemma of American Evangelicalism, 1835-1860 (Notre Dame, 2010). He has contributed articles to the Encyclopedia of Alabama, presented papers at the Alabama Association of Historians and the Alabama Historical Association, and has served as academic programs director for the Alabama Association of Historians. He also served as founding coordinator of the Great Ideas Summer Institute for high school students held on the Samford campus each summer.

Wallace was named Howard College of Arts and Sciences Outstanding Teacher in 2011, and was named the University Fellows Faculty Member of the Year in 2007.