Believe In Yourself: Vivian Cunningham Earns Samford Degree at 78 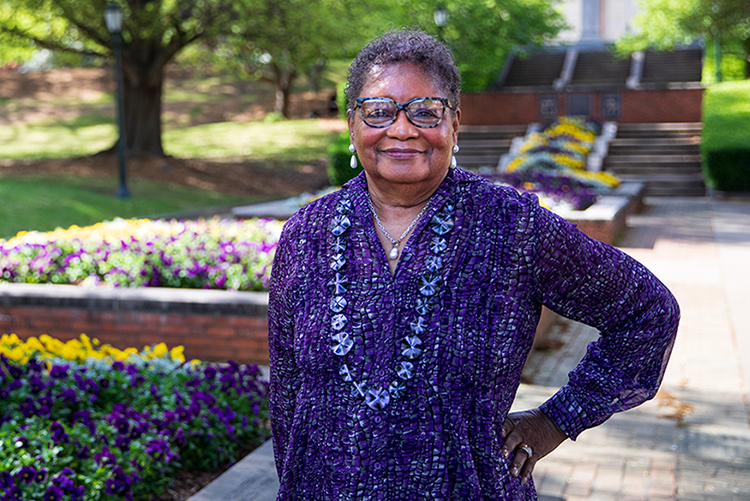 Vivian Cunningham will graduate from Samford University at the age of 78 this week. There was no easy path to her degree, and long breaks might have become permanent if not for the family, friends and Samford faculty and staff who encouraged her when she wasn’t sure she could go on. “Then, I had the Lord on my side, too,” Cunningham recalled as she visited Samford’s campus for the first time in a year disrupted by COVID-19. The visit brought to mind how much she has loved the Samford community and what this latest academic accomplishment means to her.

As a child in Birmingham’s Titusville neighborhood, Cunningham thought she’d be a seamstress. She inherited the sewing skills of her grandmother and great-grandmother, studied the trade in school and sewed for family and friends. She even worked in a dress shop in Atlanta before returning to Birmingham as a single mother of two children in the late 1960s. She still sews, but long ago traded that career for custodial service on the night shift at Alabama Power Company in order to provide for her children.

“It was tough for her, but us being young, we didn’t really know,” said Cunningham’s son Donald, now a Facility Control Operator at Alabama Power Company. “She was taking care of her family, working at night at the power company, and couldn’t find babysitters to keep us, so I had to grow up and be a man before time, take care of my sister,” he recalled as he accompanied his mother to Samford’s sunny Quad, a long way from those lonely nights. In spite of the hard work and difficult schedule, his sister, Tarra P. Barnes, recalls that her mother “was love personified, and provided encouragement in every endeavor we sought”.

The children, in turn, encouraged their mother in her remarkable path through work and education. When Cunningham decided that 13 years as a custodian was plenty, she worked her way up to a day shift in Alabama Power’s mail room, eventually managing all of its external mail. She also began to take advantage of the company’s Tuition Reimbursement Program, earning course credits at many of Birmingham’s colleges and universities. She retired in 1992 but carried on with her classes, just for the love of knowledge as much as anything. She earned her Associates Degree in Paralegal Studies from Virginia College, but continued to explore new educational opportunities. “I knew that I still wanted more,” she said.

Cunningham’s accumulated credits, a Samford brochure and welcoming staff set her on the path to the Liberal Studies degree she completed this year, six years after starting. “There were some times I wanted to give up,” she said. But when a little voice inside her said “I'm not going back–I’m just tired,” another would answer “go on back to school, just keep on going”. Donald, Tarra, son-in-law Colonel (Retired) Rob Barnes, friends, family, church members and her Samford teachers magnified that encouraging voice. Cunningham said Samford Office of Professional Studies director Bryan Gill and associate director Nicole B. Otero were especially helpful in advising her and keeping her on track toward her degree. She did keep on going, meeting every challenge on her long path. In 2020, she mastered remote learning skills just as she mastered other aspects of her Samford education.

Cunningham particularly enjoyed the Samford leadership courses that inspired her to wonder how she might lead. Those who know her best could answer that question by pointing out her decades of sacrifice and selfless service. Daughter Tarra Barnes is among them, of course. “She was my inspiration and motivation for pursuing a Ph.D.,” Barnes said. “If she can complete her bachelor's degree at 78 years old, then why wouldn't I continue my higher educational journey? I wholeheartedly appreciate her strength and influence on my life and I am extremely proud of her!”

Cunningham is rightly proud of her accomplishments, too, but she still isn’t done. “I might go for the master’s degree,” she said, aiming ever higher. “I don’t want to stop. I love to read, I love to sew, I love to watch movies. I don’t want to just sit because I’m retired. I want the knowledge.” As she prepared to walk across Samford’s commencement stage, she offered some of that hard won-knowledge to anyone facing a long path or doubts about their dreams. “Believe in yourself, because you can do it,” she said. “Keep God in the plan and you’ll make it. Don’t let anybody discourage you.”

UPDATE, 5/27/21: To honor her legacy, Samford has established the Vivian Cunningham Leadership Scholarship, which will help other students who exhibit characteristics of leadership, determination and perseverance pursue their dreams of a college education. The scholarship was announced on NBC’s Today Show on May 28 during a live segment with Hoda Kotb and Jenna Bush Hager.