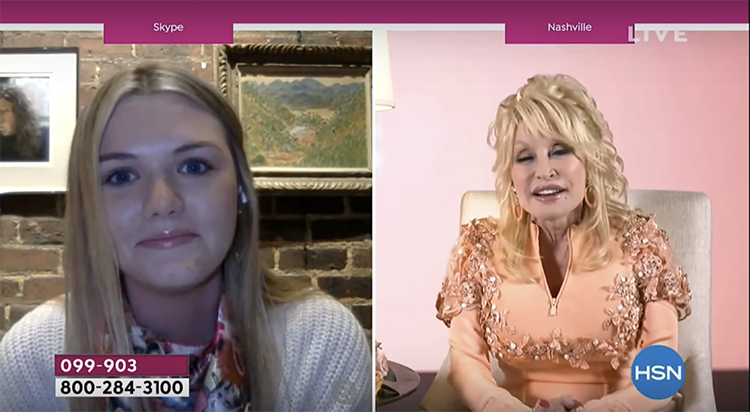 Samford University communication and media student and John Howard Scholar Aubrie Strange had an unexpected opportunity to chat with country music legend Dolly Parton this summer. What began as the Tennessee native’s endorsement of Parton’s new line of perfume on the Home Shopping Network became an opportunity for Strange to reveal how Parton’s philanthropic work has influenced her life.

Strange said she and her two sisters participated in Parton’s Imagination Library project, which sends free books to children up to age 5. Their mother worked in the Dolly Parton Birthing Unit of Tennessee’s LeConte Medical Center. Strange received the Moderna COVID-19 vaccine, which was partly funded by Parton’s $1 Million donation for the cause. “It’s sounds like I’m all in that family!” Parton said.

“I’m so happy that you’re one of my kids!” Parton told Strange. “I just think that when you’re in a position to help, you should be able to get out there and do something for someone else.”

Strange shares Parton’s passion for service, earning regional honors for her work as president of Samford’s Partners Acting in the Community Today (PACT,) a community engagement and social justice student organization that works with the university’s Frances Marlin Mann Center for Ethics and Leadership. Strange also was named Outstanding Journalism and Mass Communication student in the Department of Communication and Media’s spring 2021 honors ceremony.