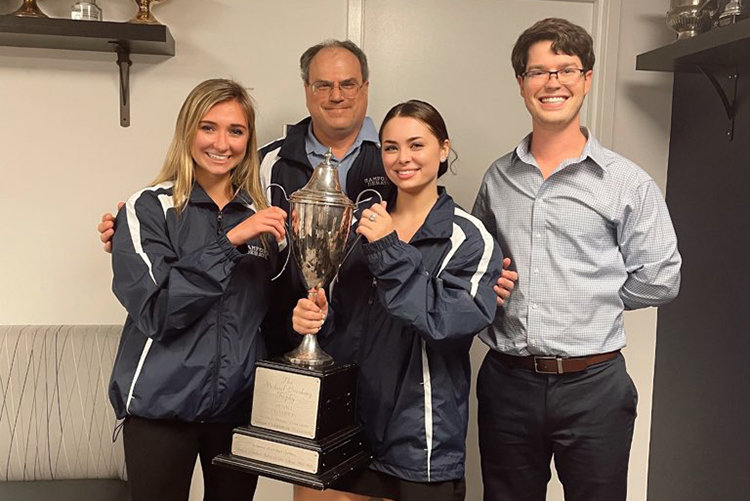 Samford University debaters Grace Blackwell and Abi McKibben are the top novice team in the nation after winning in that category at the American Debate Association National Championship at Emory University March 5-7.

Blackwell and McKibben also won the Front Royal Cup for the American Debate Association, presented to the first-year team with the best record in the regular season. That record included advancing to the final round of three tournaments in addition to the team’s national championship victory. Also at the national championship, votes by coaches, judges and peers from other universities honored Blackwell as Novice of the Year. She earned the regional Novice of the Year title in competition in February.

“This is the first time in the University’s history that Samford has won the ADA novice national championship, the gold standard for college novice debate in the United States,” Galloway said. “Abi and Grace have been phenomenal all season long, and their performance is truly one that will stand the test of time.”

Assistant director Lee Quinn said the victory is also noteworthy for a female team in a male-dominated activity. He praised Blackwell’s and McKibben’s dedication to the work while their peers were getting some relief from their studies during Samford’s spring break. “Abi and Grace were busy winning a national championship in one of the most intellectually intense activities one can compete in,” Quinn said.  “Their victory is a testament to literally hundreds of hours of hard work and effort, of setting a goal and working exceptionally hard to achieve it.”

These latest honors for Samford’s debate program follow close on its success at District 6 regional competition in late February. Sawyer Emerson was named Varsity Debater of the Year there in another first for the program, and two Samford teams qualified for the upcoming National Debate Tournament.