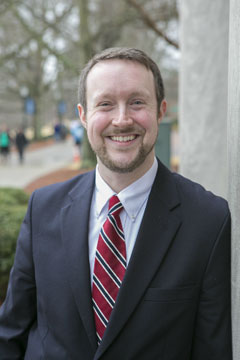 Joel Scott Davis is a composer, arranger, conductor, educator, and multi-instrumentalist whose music has been performed and recorded by the likes of Duo46, Amernet String Quartet, Cahaba Saxophone Quartet, and the Samford String Quartet at such venues as Carnegie Hall, Vienna’s Palais Ferstel, and Harlaxton Manor in England. Critics have hailed his music for its “honest beauty” and “heartfelt harmonies,” while others have lauded his “balance of craftsmanship, sincerity, and musical imagination.” His work has garnered favorable reviews from American Record Guide and Fanfare magazines, among others.

Recently, Davis was named a finalist for the 2020 Arlin G. Meyer Prize in the Performing Arts for his String Quartet No.1: Vespers. Past honors and recognitions include the 2017-2018 American Prize in Chamber Music (Honorable Mention / Semi-Finalist), and the 2016-2017 American Prize in Music (Semi-Finalist) His compositions have been featured in international film festivals; national and local television, radio, and Internet broadcasts on PBS, Alabama Public Radio, Creative Motion Online, Roku TV, and WRUU 107.5 FM – Savannah Soundings; and such streaming platforms as Apple Music, Spotify, Amazon Music, and Bandcamp. His work has been published by Capitol Music Group/Brentwood Benson and distributed by Sheet Music Direct, ArrangeMe (Hal Leonard), and the MSR Classics record label, along with independent releases.

An alumnus of the Lilly Graduate Fellows Program, Davis now serves as Professor of Music at the Samford University School of the Arts, in addition to serving as Instrumental Associate at Shades Mountain Baptist Church. In 2019, he was awarded Samford’s John H. Buchanan Award for Excellence in Classroom Teaching. Prior to his faculty appointment at Samford in 2012, he held teaching appointments at the University of Alabama at Birmingham and Claremont Graduate University. He holds degrees in music theory and composition from Samford University and Claremont Graduate University, where he studied with Peter Boyer, Edward Zeliff, James Jensen, Rebecca Remley, and Bob Burroughs. Additional information may be found at joelscottdavis.com.