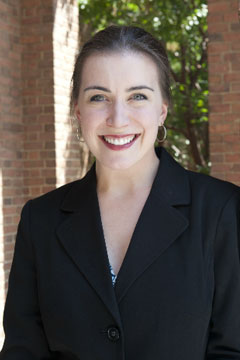 Dr. Kristin Kenning moved to Birmingham from Minneapolis, Minnesota, where she worked as a freelance stage director and performer.  As Director of Opera at Samford, Kenning is passionate about teaching acting to young singers through opera workshop and opera productions. Recent Samford Opera productions include The Magic Flute, Lucinda y las Flores de la Nochebuena, the premiere of The Ghosts of Gatsby, The Marriage of Figaro, On The Town, Amahl and the Night Visitors, The Pirates of Penzance, Hansel and Gretel, and Trouble in Tahiti. Samford Opera Workshop competes in the National Opera Association's Collegiate Scenes Competition – winning 1st place in 2020 (Cleveland) and 2018 (New Orleans), and winning 2nd place or placing as finalists in six other recent competition cycles.

As a freelance stage director, productions include Il matrimonio segreto and La Canterina for Mobile Opera; The Pirates of Penzance and The Three Little Pigs for Opera Birmingham; The Ghosts of Gatsby for Seagle Music Colony; The Merry Widow, Naughty Marietta, The Desert Song, and Die Fledermaus for the Birmingham Music Club; Mlle. Modiste and The Vagabond King for Minnesota's Skylark Opera, The Match Girl’s Gift on the Minnesota Centennial Showboat, and the premiere of The Ladysmith Story at the Red Eye Theatre in Minneapolis. She has directed shows for many theatres and festivals in Minneapolis, including: Theatre Unbound, the Minneapolis Institute of Arts, the Minnesota Fringe Festival, Artsmosis, and the Minneapolis Short Film Festival. She is a champion of new work and has directed often for the Atlanta Opera’s 24-Hour Opera Project – winning the competition in 2013 with composer Evan Mack’s Beach and Moan and in 2016 with composer Liam Wade's The Stranger the Better.

Samford commissioned and premiered the new American opera The Ghosts of Gatsby in 2018 about the lives of Zelda and F. Scott Fitzgerald.  The opera, composed by Evan Mack to text by Joshua McGuire, then went on tour Alabama, and was presented at the Opera America New Works Forum in New York City in January of 2019 in collaboration with Opera Birmingham and Seagle Music Colony. The Ghosts of Gatsby won the National Opera Association’s coveted Dominick Argento Chamber Competition in January of 2019, and Samford University’s production of the work came in second place in the Opera Production Competition.

Kenning previously taught voice at Luther College, Iowa, and opera workshop at the University of Minnesota. As a vocalist, she has a diverse background of experience performing in musical theatre, opera, jazz, church, and concert settings.  She has performed throughout the US and in Europe and South Africa.  Her voice teachers include Elizabeth Mannion and Jane Giering DeHaan.  Kenning’s own voice students have gone on to great success as musical theatre and operatic performers, as church musicians, and as teachers.  Graduating seniors have been accepted at competitive graduate programs, including Eastman School of Music, Royal Academy of Music, Guildhall School of Music & Drama, Indiana University, Boston Conservatory, and Peabody Conservatory.