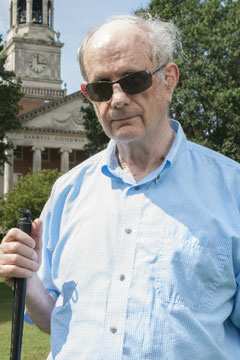 University Carillonneur, Lecturer, Carillon, Instructor
School of the Arts
Division of Music
212 Buchanan Hall
sbknight@samford.edu
205-726-2503
Stephen Brooks Knight is a pianist, organist, carillonneur and composer from Birmingham, Ala., and has been Samford University’s resident carillonneur since 1974. Knight has received numerous awards and honors, including winner of the City of Mechelen Carillon Composition prize from the Royal Carillon School in Mechelen, Belgium, and two-year recipient of the Young Blind Composers Award from the National Federation of Music Clubs. He also received the Samuel P. Hayes Award from the Perkins School for the Blind and the Harry R. Wilson Award from Samford University.