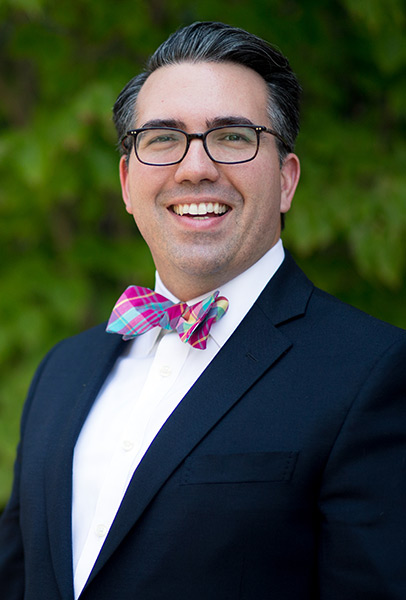 Frederick Teardo is Director of Music and Organist at the Cathedral Church of the Advent in Birmingham, Alabama, as well as Adjunct Instructor of Organ and University Organist at Samford University. Prior to his appointment at the Advent in 2012, he held a six-year tenure at Saint Thomas Church Fifth Avenue in New York City, where he served first as Assistant Organist and then Associate Organist to the late John Scott.

Dr. Teardo received the Doctor of Musical Arts degree from the Yale School of Music and Institute of Sacred Music, as well as the Master of Musical Arts and Master of Music degrees.  At Yale, he studied organ with Thomas Murray and harpsichord with Richard Rephann. During his time at Yale, he held the post of Yale University Chapel Organist, and later served as Assistant Organist at Trinity Episcopal Church on the Green in New Haven, CT. Dr. Teardo received his Bachelor of Music degree with Highest Honors from the Eastman School of Music in Rochester, NY, where he studied organ with David Higgs. His other teachers have included Stephen Roberts and Haskell Thomson. He has also studied improvisation with William Porter and Jeffrey Brillhart.

An avid performer, Dr. Teardo has won first prize in several competitions and has performed across North America, including such venues as the Cathedral of St. John the Divine, Saint Bartholomew’s Church, Saint Patrick’s Cathedral and the Metropolitan Museum of Art in New York City, Washington National Cathedral, Grace Cathedral in San Francisco, Methuen Memorial Music Hall, Trinity Church Copley Square in Boston, Princeton University Chapel, and the Cathedral Church of the Redeemer in Calgary, Alberta. Dr. Teardo’s solo recording is available from JAV Recordings, and features works of Bach, Boyvin, and De Grigny on the historic 1741 J.A. Silbermann organ of Saint Thomas Church in Strasbourg, France. He has also been a featured performer at National and Regional Conventions of the American Guild of Organists and Organ Historical Society, on American Public Media’s Pipedreams, BBC Radio 3, and five CD recordings with the Saint Thomas Choir of Men and Boys. Dr. Teardo is also founder and artistic director of the Birmingham-based choral ensemble Highland Consort. Recently, he has been in high demand as a choral conductor, having led the RSCM Course in Houston in 2015 as well as several choral workshops across the Southeast.