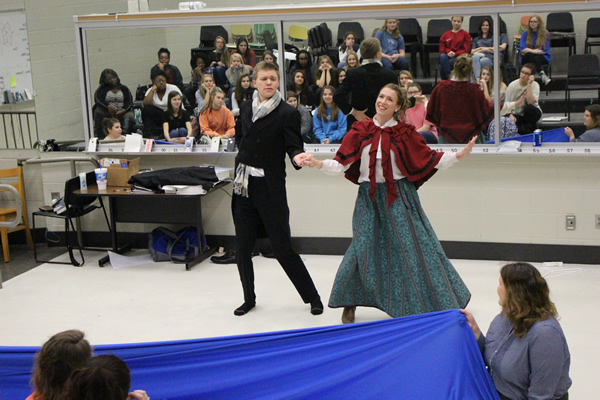 Samford encourages students and faculty to reach beyond its campus to broaden perspectives and serve our community at home and abroad. During Jan Term 2017, students experienced music and the arts in Italy, laid groundwork for two mission projects in Ecuador, and exposed the young and the old in Birmingham to opera through workshops.

Each year, Samford Arts opera students tour local Birmingham schools and retirement communities, sharing their love of opera and performing. The 2017 tour took place Jan. 17–20 and featured scenes from the upcoming spring production The Marriage of Figaro as well as other vignettes from their repertoire. The tour included 12 members of the Samford community. They visited Vestavia Hills High School, Episcopal Place, Gardendale Elementary, Regency Retirement Village, Bagley School, Advent School and Brookdale. The Samford Arts opera program is led by assistant professor Dr. Kristin Kenning, and is generously supported by the sponsorship of Dr. Chandler and Jane Paris Smith.

Twelve interior architecture seniors completed the research portion of this year’s Design Education for World Impact project during the fall semester. This senior thesis project includes two undertakings: the renovation and expansion of a church in the jungle town of Tena to include space for counseling and social service for abandoned women and single mothers as well as new worship space; and the interior of the main assembly building at a camp in the jungle that serves children and churches in the eastern part of the country.

Students interviewed the Ecuadorian client organization and presented their findings via Skype. Five students traveled with associate professor Preston Hite to Ecuador in January to conduct a predesign visit, which included interviews with locals and investigation of the project sites. They also experienced cultural encounters in Quito, the Andes mountains and the jungle.

The spring semester will focus on the execution of the design plan and will culminate with a return trip in the summer to assist with construction of the two facilities.

For more information about this program or to volunteer to be a part of the mission trip, email phite@samford.edu.

Art and Music in Italy

The Sixteen Centuries of Italian Music course was designed and developed by Dr. Donald Sanders, and Dr. Joel Davis had the privilege of being a part of the trip's maiden voyage during his own student days at Samford in 2004. Sanders invited Davis to serve with him as coleader for the tour in January of 2014, and this January marked his first opportunity to serve as faculty leader for the course.

Nine students from a variety of majors (accounting, art, athletic training, education, finance, music) participated in this arts abroad course, which culminated in a 10-day tour of sites of artistic importance in Milan, Mantua, Venice, Florence and Rome. The group visited museums, palaces, churches and concert halls. Some noteworthy highlights were seeing Leonardo da Vinci’s The Last Supper and Michelangelo’s David, Pietá and the frescoes throughout the Sistine Chapel at the Vatican; touring the Ducal Palace in Mantua (where Claudio Monteverdi’s opera Orfeo premiered); visiting the Basilica of St. Mark in Venice; and attending live concert performances by professional ensembles in Venice and Rome. The group managed to connect with fellow Samford faculty and students from Howard College of Arts and Sciences during the trip.