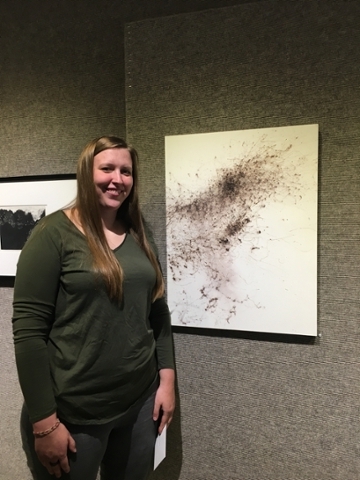 Samford School of the Arts Department of Art and Design honored students and announced the winners of the Annual Juried Art and Design Show at a recent reception in the Art Gallery.  Students received recognition and medals for high GPA’s along with scholarship awards.

Th IARC Friends Scholarships were given to Emily Baxter and Clarissa Smith, the Fine Arts Lowell Vann Scholarship was given to Brennan Smith and the Trevelyn Grace Campbell scholarship was awarded to Molly Green.  The Dean’s awards select students’ works from the show to be on display in the Dean’s office during the next school year.  Winners include Austin Pulmano, Girl in the Shadows, Aspen Herzog, Rememberr, Betsy Shuttleworth, Nuevo Paeto, and Mary Elizabeth Cash, It’s Closer Than You Think.

This year’s professional judge and principal architect with Birmingham-based multidisciplinary design studio bDot architecture Brian Roberson was on hand to announce the winners of the juried show.  Honorable mentions included Nicole Weldy, Brooke English, and Noah Stalcup.  First place in graphic design went to Timia Lewis, interior architecture to Rich Fridy and art to Emily Kent.  Best in show went to Kaitlin West for her work Windblown.  Roberson remarked, “Kaitlin used creation to help create,” in this piece by suspending three pens that swayed in the wind over a two-week period.  The project was part of West’s mixed-media course last spring and was given direction to develop a “incognizant piece whereby the artist lets go of all controls.”  She noted that this class was a turning point in her artistic process and the way that she approached her art.  Roberson said that he was “looking between the lines” while judging the different works and praised the depth of talent represented in the show.

The Juried Show was underwritten by Michael J. and Mary Anne Freeman.  Students, faculty and guests always enjoy a lively pizza reception to celebrate the conclusion of the show.  Julie Boyd, the School of the Arts advancement officer was on hand to thank the Freeman’s for their generous support and to announce that John and Marsha Floyd will sponsor the entire Art and Design series of events in 2018-19.