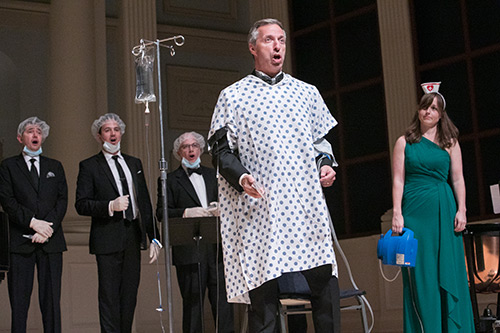 Samford University’s School of the Arts opened its performance season this week with an impressive display of talent from its faculty at the Faculty Gala.  Thanks to Patty McDonald for underwriting the gala and the reception that followed along with the many friends of Samford Arts for coming and supporting the event.

Professor and Department Chair of Performance Studies in the Division of Music Randall Richardson notes, “This year’s Faculty Gala, an annual event at Samford, was one of the best in recent years. It featured a wide variety of musical selections ranging from classical to musical theatre and finishing with a song from Bye Bye Birdie, updated and performed by Dean Joe Hopkins and music faculty. A depth of talent was evidenced by the number of newer faculty who performed.”

The grand finale included a serenade by Dean Joe Hopkins to his administrative assistant Suzy Metts, entitled “Suzy, Talk to Me.” Hopkins recently experienced a medical emergency while traveling in Costa Rica. The finale shared a “farewell” video from Hopkins along with a chorus of scrub clad back-up singers.  In recent years, Brad Diamond and Hopkins have treated the audience to a fun and often hilarious musical tribute to complete the show.

From student recitals to guest artist series, the School of the Arts features over 200 performances annually, enriching the Samford community along with the Birmingham arts community.  For more information on upcoming events visit Samford.edu/arts/events.