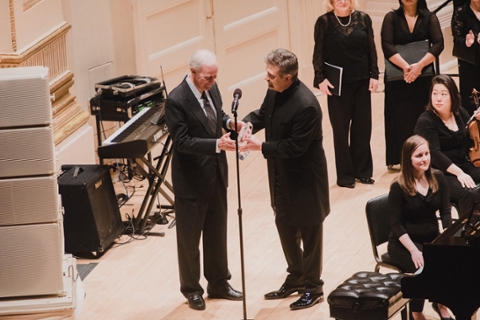 Distinguished Concerts International New York (DCINY) is pleased to announce that Dr. Milburn Price was the recipient of the DCINY Educator Laureate Award. Celebrated as a conductor and educator worldwide, Price received the award on Sunday, April 15, at the DCINY performance of Dreamweaver: The Music of Ola Gjeilo and Dan Forrest at Carnegie Hall. Co-founded by Iris Derke (General Director) and Jonathan Griffith (Artistic Director and Principal Conductor), DCINY celebrates its 10th Anniversary this season and is proud to include this award ceremony as a part of those celebrations.

A former student of Dr. Price’s, James M. Meaders presented the award as well as was the guest conductor for the evening.  Sherrie and Dan Lawhon were on hand to be part of the event along with Evan Gunter, Samford alum and Price Scholarship winner.

Price said, “I am both honored and humbled by this award from Distinguished Concerts International New York, especially in light of the stature in the choral profession of its previous recipients.”

Milburn Price was the Conductor Laureate for DCINY’s production of Brahms Requiem on Sunday, June 19, 2011 at David Geffen Hall, Lincoln Center. Dr. James M. Meaders, DCINY Artistic and Educational Consultant, presented the award on stage to Price, who has been his mentor. Dr. Meaders comments - “Milburn Price has invested a lifetime in the graceful nurture and wise mentorship of his students, and I am sincerely humbled and thankful to be included in that fortunate group. Dr. Price has unfailingly demonstrated excellence, eloquence, kindness, sincerity, and humility, modeling for all who would see the finest characteristics of those who would call themselves, ‘Educator.’”

“He brings wisdom and extraordinary experience in his art with an inspiring and energetic spirit,” said Angie Willoughby, chair of the Mississippi College Music Department. “Our students had an incredible opportunity to learn and perform with Dr. Price.”

Price served as National President of the American Choral Directors Association from 1999 to 2001. Guest conducting and lecturing engagements have taken him to twenty-eight states, as well as Australia, Brazil, Canada, England, Germany, Hong Kong, Scotland, Switzerland, and Russia.

Price has served most recently as Dean of the School of Performing Arts at Samford University in Birmingham, Alabama. Prior to moving to Samford, he served as Dean of the School of Church Music at the Southern Baptist Theological Seminary in Louisville, Kentucky and as Chair of the Music Department at Furman University. Since retiring from Samford, Price has served one-year appointments as Visiting Professor at Stetson University, Mercer University, and Mississippi College.

One of the editors of the Celebrating Grace Hymnal, he is the co-author of two books about worship and church music, as well as numerous articles.

The DCINY Educator Laureate Award acknowledges an individual’s contribution to music education. It recognizes a personal commitment to instilling a life-long love of making music. The award recognizes an educator who has contributed uniquely and significantly to some aspect of the broad scope of music education. The award can be given for cumulative lifetime achievement or a singular contribution.

Past recipients of the award are Dr. Donald D. Donaldson, professor emeritus of Asbury College and former choral director at Shawnee Mission South High School and chair of the music department at Kansas Wesleyan University; Craig Jessop, former music director of the world famous Mormon Tabernacle Choir and Music Director of the American Festival Chorus and Orchestra; and Dr. Eph Ehly, formerly the Director of Choral Studies at the Conservatory of Music at the University of Missouri-Kansas City.

Founded in 2007 by Iris Derke and Jonathan Griffith, with its first public performance in January 2008, DCINY is a leading producer of dynamic musical entertainment in renowned international venues. Over 40,000 musicians representing 44 countries and all 50 states have participated in DCINY productions. Since the inception of the company, DCINY has produced 17 world premieres and more than 200 concerts for over 200,000 audience members.

DCINY commemorates its 10th Anniversary Season in 2018. With unforgettable, world-class concert experiences, empowering educational programs, and a global community of artists and audiences, DCINY changes lives through the power of musical performance.