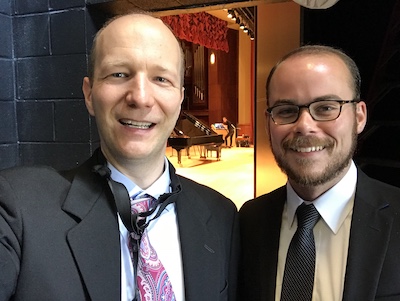 Clarinetist and conductor Brian Viliunas is an associate professor of music in the Division of Music at Samford’s School of the Arts where he teaches clarinet, music classes, and conducts all orchestral activities. He studied at Northwestern University, Rice University, and completed his Doctor of Musical Arts degree at Arizona State University. Brian was a Fulbright scholar to Norway, twice competed in the Carl Nielsen International Clarinet Competition, and won Third Prize in the International Clarinet Association Young Artist Competition. Brian is currently the principal clarinetist for the Arizona Opera.

This summer he performed at Clarinetfest in Knoxville, TN with former colleague and Samford student pianist John Robertson.  According to Viliunas, “Clarinetfest is the largest gathering of clarinet players around the world. It is five days of concerts, lectures, master classes, competitions, and all the new gadgets and gizmos for playing the clarinet.”  He was selected out of an application process that included 240 performers from around the world.  He enjoyed being part of this year’s event noting, “I am always impressed by the beautiful sounds, creativity of new compositions, and the ways the manufacturers are making advances in technology that make it all possible.”

Viliunas is a busy performer along with his teaching responsibilities at Samford.  This fall he will have three recitals in Alabama in September as well as events in Florida and Tennessee. In January and February he will perform with the Arizona Opera.

Performing is an important part of a musician’s repertoire and Viliunas likes the response of his audience, “I really enjoy sharing my story with the audience. In an abstract art like music, it is unpredictable how people will respond, but when you are able to make that connection, it is so rewarding.”

When asked how he chose the clarinet, he responded, “It’s funny, because I wanted to play the trombone or the saxophone! But my mom said that my grandfather had a clarinet under his bed, and that was that!”

Viliunas has a special connection with his students and his orchestra at Samford.  He said of his teaching experience, “I love the way the students and faculty are able and encouraged to tell their stories. I love the way I can look at everyone in the orchestra right before we start playing, and their faces capture the passion and dedication of preparing for the concert by smiling. I love the way the audience leaves the performance feeling enriched and inspired because of it. The world is better for them!”

The Samford Orchestra will have its first performance on Oct. 8 at 7:30 p.m. in Brock Recital Hall.  Orchestra concerts are sponsored by Patty McDonald.  In addition to the four annual concerts, the orchestra will also accompany two musical events in theatre and opera. Visit Samford Arts events page for a full schedule.