School of the Arts' Division of Music Celebrates Students 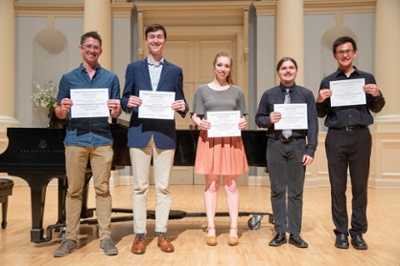 The Division of Music in Samford University’s School of the Arts celebrated the talents of students and presented multiple awards and scholarships at the annual honors recital April 30 in Brock Recital Hall.

Phillips also received the Presser Undergraduate Scholar Award. This award is presented to an outstanding student majoring in music at the end of the student’s junior year.

Freshman Pierce Jay Moffett received the Robert B. Hatfield Scholarship for Excellence in Music Ministry. The award was established to provide scholarship assistance for currently enrolled Samford School of the Arts Division of Music students studying music and worship.

The evening concluded with a reception in Boren Courtyard. Recognition was given to Patty McDonald who was not able to attend for sponsoring this event.