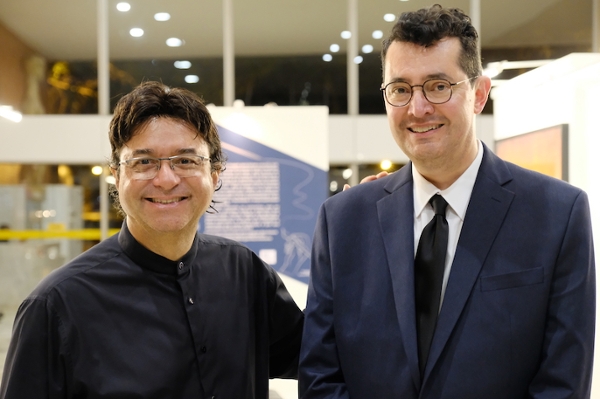 Samford Associate Professor and Composer Mark Lackey was one of only 30 international composers to participate in the The São Paulo Contemporary Composers Festival in Brazil.  Lackey’s piece, Reef, was selected and debuted by the Brazilian National Theatre Orchestra conducted by Cláudio Cohen. The piece is also the winner of the Alabama Orchestra Association’s 2020 All-State Orchestra Festival Composition Contest and will be performed at the University of Alabama this coming February.

“It is very difficult for a composer to get a performance of a work by any orchestra, even a student group. But God has really blessed my efforts with this world premiere in Brazil,” Lackey said.

According to Lackey, “The Festival focused on defining new classical music,” a genre based on Western classical traditions but exploring new sounds and possibilities.  His ten-day visit also included masterclass presentations at local universities.  Reef (2019) is a meditation on the beauty, the power, and the fragility of those majestic undersea ecosystems. From stately low brass pronouncements to capricious comments from the upper brass, and from the driving asymmetrical rhythms of progressive rock to the lyrical lines of the woodwinds (with a nod to Ravel), Reef expresses wonder at our mysterious oceans.

“It was an honor to work with the orchestra and Maestro Cohen, who was very generous in allowing my input,” said Lackey.

Reef was presented to a large audience in the concert hall in Brasília, Ciné Brasília, an example of that city’s famous modernist architecture. For Lackey, the experience was one of professional growth as a musician and an educator.

“The Festival in Brazil provided insight into the cosmopolitan world of new music and encouraged me to pursue my interests in developing a more complex and somewhat avant-garde sound,” he said. “Seeing the boldness of other composers really inspired me to experiment more and encourage the same for students just finding their musical voice.”

A Jasper native, Lackey joined the faculty at Samford in 2013.  He recently released his first album Fairy Tale.  He teaches music composition and theory. He earned the degrees Doctor of Musical Arts in composition, Master of Music in theory pedagogy, and Master of Music in composition from The Peabody Conservatory of Johns Hopkins University where his teachers included Christopher Theofanidis, Bruno Amato, and Nicholas Maw.