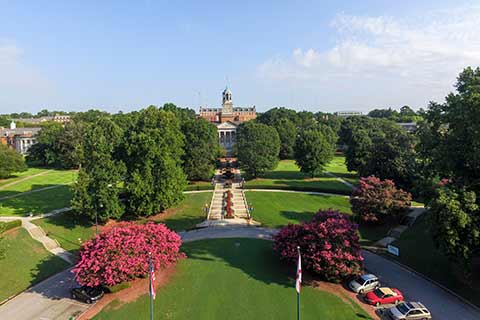 Samford will participate in a nationwide bell ringing ceremony to promote healing and reconciliation on Sunday, August 25. Stephen Brooks Knight, Samford’s resident carillonneur, will perform several spiritual selections on the Rushton Memorial Carillon at 2 p.m. The event, organized by the National Park Service, commemorates the 400th anniversary of the first landing of enslaved Africans in English-occupied North America. The National Park Service has invited communities to come together to ring bells in solidarity for four minutes – one for each century.

Samford’s carillon was first installed on campus in A. Hamilton Reid Chapel in 1968. It was donated by William J. Rushton in honor of his parents, two sisters, and brother. When the carillon was first erected, 49 bells were included. It was the first four-octave chromatic carillon in the United States. Each bell was cast with a meaningful inscription, making the bell system not only unique to the United States but to the world. No other bell system at that time included inscriptions on each bell. In 1979, the bells were moved to the Harwell Goodwin Davis Library and 11 more bells were added at that time.

Knight is a pianist, organist, carillonneur and composer from Birmingham, Alabama. He has received numerous awards and honors, including the City of Mechelen Carillon Composition prize from the Royal Carillon School in Mechelen, Belgium, and he is a two-year recipient of the Young Blind Composers Award from the National Federation of Music Clubs. He also received the Samuel P. Hayes Award from the Perkins School for the Blind and the Harry R. Wilson Award from Samford University.