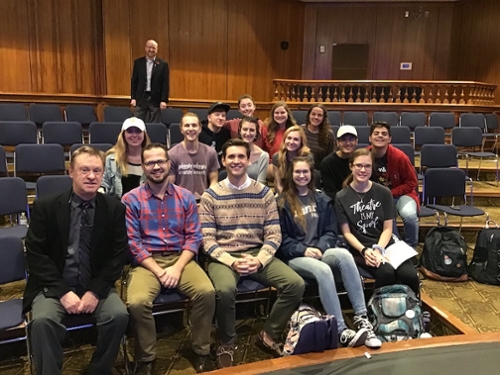 Samford Theatre and Dance hosted alumni Brad Roller and Jordan Bondurant on campus this fall as guest artists to meet with students and offer advice on how to approach a career in the theatre world.  Brad is currently located in Los Angeles and Jordan is in New York, so the duo offered a cross country perspective.

They each took a different path after Samford; Bondurant went on to graduate school while Roller proceeded with his career.  Jordan is now an accomplished actor, singer, and writer and has appeared on Broadway in the Tony Award winning Mamma Mia, A Gentlemen’s Guide to Love and Murder and was in the original cast of Clockwork Orange.  He has had equal success with television and trained with some of the industry’s top professionals.

Roller is an award-winning producer, director and writer.  Most recently, Brad served as Executive Producer and Showrunner for MLB The Show, Weekday Wrapup, and Staged Dad (coming to Amazon Prime 2020).  He has also developed and produced over 15 films during his career.

Taking time out from their busy production schedules, they shared their knowledge and experience, providing a behind-the-scenes glimpse of what it really takes to succeed in the world of entertainment.

While on campus, they provided numerous sessions with our students answering questions about life in the profession, offering tips on everything from moving to a new city, acting for stage and screen, and creating your own unique brand.  They invited all of our students to reach out to them to help them launch their careers.

In addition to all of the professional guidance, both Roller and Bondurant humanized the process with laughter and reality checks.  They encouraged students to dig into the opportunities at Samford and challenge themselves now.

Despite their personal success, they both were very humble and shared their appreciation for the chance to come back to Samford. In a gracious thank you note, they said, “We wanted to take a moment and say what a privilege it was to return to Samford and work with this great crop of students. Thank you to every single one of you for making this happen and helping along the way. It was an honor to receive the alumni recognition, and we had a blast at the lunch!

Dr. Westmoreland remarked ‘We hope that Samford played some part in your success,’ and the truth is that Samford has played almost the entirety of any success we have received. It is because of faculty and administration like you--who care for us individually and care about the advancement of The School of the Arts--that we have been able to thrive and give back.

As we told Mark Castle and Dr. S (Sandley), we will happily return any year that we are asked!”