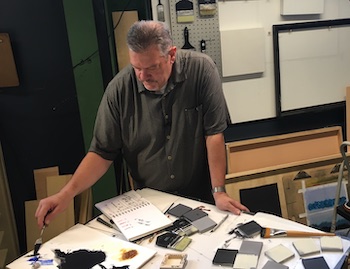 When Larry Thompson began working on an art piece that represented cities with mass shootings across the country, he never anticipated adding his hometown to the project.

As an El Paso native, Thompson’s piece became more personal than ever following the events of Aug, 3, 2019. Prior to the shooting, he had already been working to build an oversized art piece of canvas squares representing mass shooting in 2019. Dark canvases represent days with mass shootings and light colors represent days without. Adding a dark square representing El Paso reinforced his goal of this piece serving as a conversation starter on gun violence.

Thompson believes that “art should be something that makes people stop and pay attention.” He wants his art to “spark a conversation” and ultimately, promote change.

Thompson already has 250 dark colored squares representing shootings for 2019 and will continue to add to the installation as the year progresses.

His belief of the role of art in society is held by many art faculty members at Samford who are also committed to maintaining careers as working artists. According to Thompson, this is important as mentors. “We need to not only teach skills but also show our students how we create and share our own work with the larger community. Taking those risks with our work is a very important part of the process,” he said.

Exploring arts role in society and experiential learning are key components of the new Catalyst Curriculum at Samford where students gain professional skills and hands-on experiences in their disciplines.

Thompson’s current project is on display in Birmingham at Space One Eleven, a non-profit gallery. He and nine other local and national artists are participating in a show about gun violence entitled, We Dare Defend our Rights: The Gun Show.

With its impressive art museum, numerous art galleries and exhibition spaces, Birmingham boasts a very active art scene. Peter Prinz, co-founder and director of Space One Eleven, sees his gallery as a “Safe place for artists to ask questions, provoke hard conversations and really hold a mirror to society today.”

Prinz wants patrons to come and see this exhibit and experience the extensive talent that is right here in Birmingham. “This show really highlights the quality of local artists and combines their work with artists’ voices from around the country,” he said. “This is a historic moment for our country and we hope this exhibit will generate hard conversations.”

The initial viewing will take place during the Birmingham Art Walkon Sept. 6, 5:30-7 p.m. at Space One Eleven in Birmingham. The full exhibit will run until Dec. 31.

Thompson has been teaching at Samford for over 12 years.  He is a busy artist in addition to his teaching responsibilities and has had recent exhibits at the Pentagon, ArtPrize, and internationally in Europe, South America and Africa.