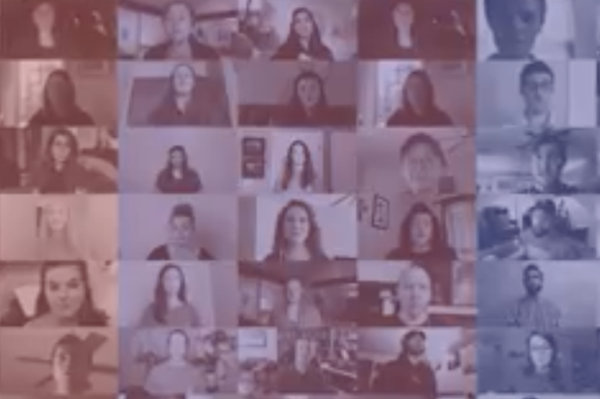 Samford’s A Cappella Choir recently celebrated its 80th anniversary. The internationally acclaimed choir has impacted hundreds of students who have been a part of it over the years. It has a very active alumni group that came together to sing Beautiful Savior in a virtual setting that was shared from their Facebook account in this video.

Caleb Wilemon, a 2014 Samford Spanish major who mixed the video, shared the story on how the project came about. “The Beautiful Savior video came together after Katie Little, a 2014 Samford graduate with an English/French double major, made a post in our A Cappella Alumni group on Facebook. She had seen orchestras and Broadway casts creating similar videos, and after someone sent her Abilene Christian University's virtual choir video of The Lord Bless You and Keep You (another Samford A Cappella favorite), she thought it was worth checking if we were able to do a similar project. On April 10th, she posted the Abilene video in our alumni group with the caption ‘Beautiful Savioranyone?’ A long tradition of singing Beautiful Savior at the end of our concerts connects generations of Samford A Cappella alumni, so it was an obvious song choice.

From there, the administrator of our group, Eleanor Stenner, a Journalism major who graduated in 2015, ran with the idea and began searching for members who could possibly put something like that together. After seeing a lot of interest from the group and determining it was indeed possible, we made a plan and started collecting videos. Chadwick McDowell, a 2016 graduate who studied Music Theory and Composition, took a photo someone had posted of the music score and recorded individual part tracks as well as a full choir track with his piano to a click. Those tracks were made available online, enabling all participants to sing along with their part or with the full choir in their headphones while recording themselves on video.

After recording, each participant uploaded their video to a Google drive folder. I then converted all the videos to audio first and mixed the full choir of the 46 participants. Then, I edited their videos together and synced in the choir mix to create what you see in the final project. It was then uploaded to our newly created Samford A Cappella Alumni Choir Facebook and YouTube pages.

In total, the team estimates it took around 40 hours of work to piece the video together, but everyone involved feels it was more than worth it to come together as a choir once again. Samford A Cappella is unlike any experience and it stands in all of our hearts and minds as one of the greatest, if not THE greatest musical ensemble any of us have been or will be a part of, so any opportunity to relive that experience is worth the time and effort. For that reason, we have left the A Cappella Alumni Choir platforms open for future projects as well.”