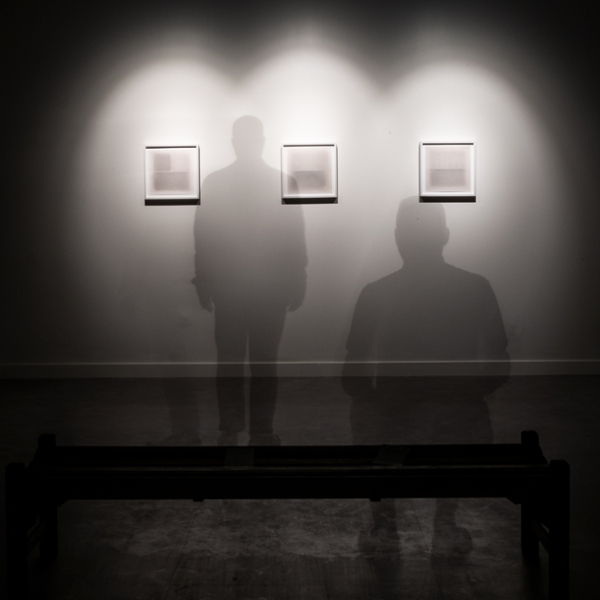 Samford’s Art Gallery is featuring the work of Pete Schulte and Andrew Raffo Dewar from Jan. 21- March 6.  23 Minutes Over Birmingham is part of The John and Marsha Floyd Art and Design Series. The artists visited Samford this week to meet with students and share insights about their installation.

In their previous collaborations over the past seven years, Pete Schulte and Andrew Raffo Dewar have pursued an “iterative” approach to their work together, such that each subsequent piece typically includes some elements or echoes of their prior work – a thread that runs through the entirety of their collaborations.

In their prior installation, The Lamplighter: An Experiment in Drawing and Sound (2018), Dewar recorded multiple streams of data from Schulte as he produced the drawing for the installation (also included in this exhibition), including his brainwaves (EEG), electrodermal activity (EDA), and audio recordings of his mark-making and the electromagnetic sounds of his electric pencil sharpener.

For 23 Minutes over Birmingham (2020), Dewar was inspired by Schulte’s recent solo exhibitions, Properties of Dust and Smoke pt. 1 and 2 (at the Chinati Foundation, Marfa, Texas and McKenzie Fine Art, New York, New York) to employ only electronically-generated shaped noise as his sound sources for their new collaboration. Taking only the random full frequency spectra of white, pink, and red noise as his resources, Dewar has shaped them into a 23-minute long piece with a variety of forms, from percussive pointillism to lengthy, slow-moving rounded contours that travel in space.

For his part Schulte developed the physical installation and produced three new drawings for the exhibition in response to the in-process sonic “sketches” that Dewar provided throughout the process, as well as the architecture of the Samford University Art Gallery, and remnants of walls built for a previous installation in the space.

Pete Schulte lives in Birmingham, Alabama and is an associate professor of art at The University of Alabama in Tuscaloosa.  In 2013 he co-founded, with Amy Pleasant, The Fuel and Lumber Company curatorial initiative. In 2019 he was artist-in-residence at The Chinati Foundation in Marfa, Texas.

Andrew Raffo Dewar is a composer, soprano saxophonist, electronic musician, and arts organizer whose work has been performed or installed throughout North America, Southeast Asia, and Europe. Dewar is an associate professor of interdisciplinary arts in New College and the School of Music at the University of Alabama.

The Samford Art Gallery’s 2019-20 exhibitions have been curated by Assistant Professor of Art Lauren Frances Evans. Her goal has been to allow viewers to engage in art in unique and varied ways this year.  Student exhibits will finish out the year with two senior exhibits and the Annual Student Juried Art Show. The Art Gallery is open to the public Monday-Friday from 9 a.m. - 4 p.m. and is located in Swearingen Hall.