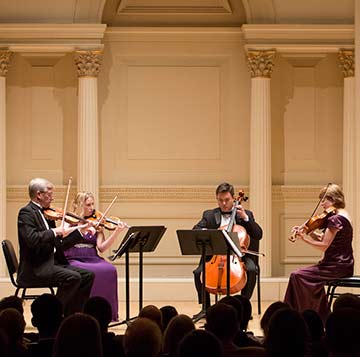 Samford University associate professors Joel Davis and Jeffrey Flaniken were named finalists for the nationally acclaimed Lilly Fellows Program’s 2020 Arlin G. Meyer Prize in Musical Performance. They were chosen for the prestigious honor based on their collaboration in presenting the Samford String Quartet’s 2017 live performance of “Antiphons-Benedictions” from Davis’ String Quartet No. 1: Vespers.

The Arlin G. Meyer Prize is awarded biennially to a faculty member from a college or university in the Lilly Network whose exemplary works of art align with their Christian faith. It is named for the late Arlin G. Meyer, professor of English at Valparaiso University, who served as program director of the Lilly Fellows Program in Humanities and the Arts from its inception in 1991 until his retirement in 2002.

The award rotates through different artistic work categories, ranging from imaginative writing and performing arts to the visual arts and nonfiction. As a result, the music performance award is only presented every 10 years.

“I have been waiting for an opportunity to participate in this competition since 2010,” Davis said. “I am immensely grateful to Dr. McGinnis, Provost Hardin and Dean Hopkins for their endorsement of our application, as this recognition would not have been possible without their support,” said Davis.

The piece was a labor of love for Davis as it allowed him to compose work that was inspired by those who commissioned it and those who would be playing it. “The Vespers Quartet has many layers of personal meaning, as I sought to weave in elements that paid homage to Dr. Bunch’s background in ministry as an Episcopal priest. Additionally, I was writing with very specific musicians in mind; accordingly, Vespers was refined to match the skills, sensibilities and personalities of the Samford String Quartet members. So much so, in fact, that virtually every note, bow stroke and gesture in the piece was crafted to match the individual voices of the two married couples who comprise the ensemble,” said Davis.

Davis was a member of the second cohort of the Lilly Graduate Fellows during graduate school.  “At the risk of sounding hyperbolic, my experience in the Lilly Fellows Program has been nothing short of life-giving, vocation-affirming and deeply inspiring,” Davis said.  He continues his relationship through an annual conference and has presented on several occasions, including this year in a virtual setting. He also serves as a member of the national selection committee for the Lilly Graduate Fellows Program, which will matriculate its 12th cohort of graduate fellows in 2021.