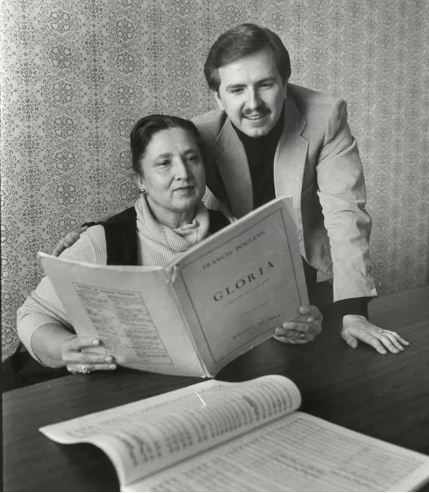 “Nora Ousley changed my life.” For close to four decades, students of Eleanor (Nora) Ousley echoed this same statement.  Her students and all of us at Samford are mourning the loss of this monumental teacher, colleague and friend who passed away in early November.

Her Samford teaching career began at Howard College in 1955 and ended in 1994 after touching the lives of hundreds of Samford students.

“Nora Ousley was one of the last surviving members of the incredibly talented music faculty assembled by George Koski (Chairman of the Music Dept. 1948-1967),” said Tim Banks, former Samford student and A Cappella Choir Director. She was an outstanding graduate of the Cincinnati Conservatory of Music, with many professional performances to her credit before joining Howard College in 1955. For many years she not only taught voice, but directed student opera performances as well, giving her students a background in vocal and stage performance. Her long lineage of students includes scores of singers who would go on pursue graduate studies at the finest American and international institutions, and careers as teachers, opera and music theatre performers, church musicians, and musicians in all lines of the profession.

“Though Nora had so many ‘stars,’ among her alumni, none shone brighter than her student Elizabeth Futral, on the stages of the Metropolitan Opera, New York City Opera, Chicago Lyric Opera, and across the world,” Banks said.

In addition to her teaching, she often joined forces with longtime piano faculty member Betty Sue Shepherd for "must-attend" recitals and concerts both at Samford and beyond.

Nora's husband Lee Ousley (a Pearl Harbor survivor) was a violinist and longtime member of the Alabama Symphony; together, they were one of Birmingham's most influential musical couples for decades.

“Nora was larger than life, yet at the same time she was also like a family member to me and the rest of the faculty. We were a smaller faculty then and were very close. I loved to hear her sing. She was amazing when she sang a very high pianissimo,” said Randall Richardson, a former faculty colleague.

“Nora expected excellence through hard work from her students. For years our voice department was known for requiring all students to develop their voices as if they were a performance major. This was not a common approach and most schools required less of the voice majors who were not performance majors. However, this approach proved to many of the students that they could be much better singers than they thought they could be.

One of the most important innovations that Nora (and Russell Hedger) brought to Samford was a system of class voice for all first year voice students. This approach has been so successful that it is still in use today at Samford. When I came to Samford in 1980, I had never had experience teaching voice in a class setting and was leery of the approach. However, after a few years I realized that it was an amazing concept that was very helpful to young singers,” said Richardson.

The desire for excellence that Nora and “the old guard” expected of their students lived on in the Division of Music after they retired. The first year class voice approach was successful when Nora was teaching and it is still successful today.

“Eleanor Ousley was a musical force of nature.  Her devotion to the vocal progress of her students, as well as a caring for them personally, is the stuff of legends.  If you asked any number of her former students about Mrs. Ousley, the greatest majority would answer with words akin to ‘Studying with Eleanor Ousley changed my life... not just gave me my true voice but inspired me to be a better person and a true professional’," said Banks.

A service was held in her honor on December 1 that included words from Elizabeth Futral, Susan Patterson, Joe Hopkins, Milburn Price, Bill Bugg and eulogy by Pastor Gary Furr.  It also included an opening and closing piano piece by Beth McGinnis, and a beautiful string quartet version of "Humbly I Adore Thee," from a choral arrangement by Lee Scott (formerly an adjunct faculty member at Samford.)