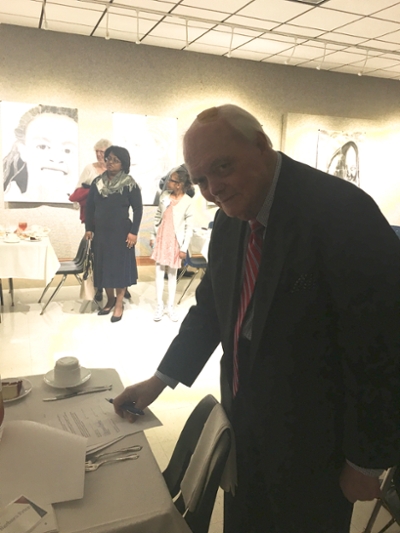 According to former Dean Milburn Price, “Clarence was a charter member of the Music Scholarship Committee from a recommendation by Elouise Williams in 1993. From the beginning, Clarence was both an active member of that fund-raising group and a strong encourager of its efforts.  Not only was he a generous contributor himself, but he encouraged others to ‘join the cause.’  His infectiously positive attitude was a great asset in the committee's work.  His contacts within the greater Birmingham community and the respect with which he was held were significant factors in the committee's early efforts.”

Malcolm Miller also served along with Clarence and said, “Clarence’s personality invited people to work together.  When you worked with Clarence, you really were motivated to get something done.”

Dean of the School of the Arts Joe Hopkins said, “Clarence was a well-loved artist who introduced countless friends to Samford Arts, and he was a faithful supporter and encourager for our faculty and students for decades.” He believed that one of his biggest roles on the Advisory Board was to encourage students. One of his significant contributions was to establish the Arts Heritage Scholarship that makes a Samford Arts education available for students with critical financial needs.  His long-term relationship with Samford included being one of the original instructors of Samford After Sundown which now operates as the Academy of the Arts, offering classes in art, music, photography and more.

Murphy Maddox is the current chair of the Advisory Board and had this to say about Clarence, “Clarence Brooks remained a dedicated friend of Samford's School of the Arts for many years, in addition to being a committed leader on the Board. His commitment to giving back is not only inspiring to me as an alumnus, but also humbling as I strive to serve in the same capacity Clarence did so faithfully.”

He is survived by Dottie, his wife of 54 years, and son Christopher. His 85th birthday will be Saturday November 7, 2020 and there will be a memorial service that morning at St. Luke's Episcopal Church in Birmingham with a celebration of his life to follow.

For more information on the Advisory Board or to make a memorial gift to the School of the Arts, contact Julie Boyd, Advancement Officer, jboyd10@samford.edu.