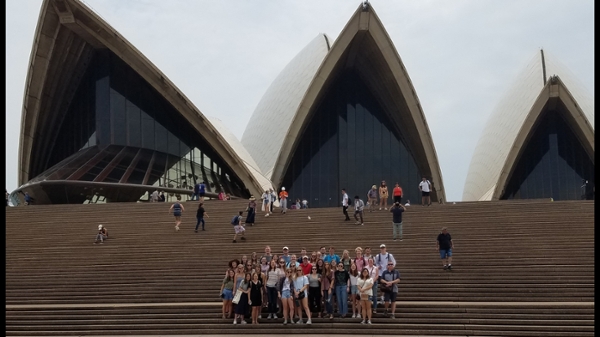 Samford’s School of the Arts plays a significant role in offering opportunities to study abroad while at Samford. This Jan Term 88 of the total 186 students abroad were part of the Arts in Society travel courses with 36 in Sydney, 29 in Dublin and 23 in London.

Over the past four years, Lauren Doss, director of Global Engagement, has overseen an expansion of the Samford Abroad program, a renovation of the Daniel House, the home-base for the London programs, and a restructuring to work with CAPA and other similar providers, a logistical company that facilitates travel details. Samford offers three types of global experiences with faculty-led courses, enrichment excursions and independent placements.  “One of the main goals is to provide quality interdisciplinary experiences for all students across all schools as affordably as we can,” said Doss.

“School of the Arts Professor Joe Cory has been instrumental in helping coordinate the School of the Arts faculty-led programs.  We have been working to replicate the Daniel House model in other areas like Dublin and Sydney,” Doss said.

Cory described his role, “As the Director of our Catalyst program, I serve as SOA’s point person for the Global Engagement Office. I help coordinate our SOA 200/250 courses we offer through Global Engagement, place instructors and work with helping to prepare faculty for the course.”

This was the first Samford program in Sydney and was led by Cory and School of the Arts colleagues Mark Castle and Brad Diamond.  Cory explained the genesis of the Sydney course,  “The School of the Arts has a long history with the Daniel House in London as well as many other programs throughout the European continent (Italy, Spain, Ireland, and eastern Europe), but we had never done anything in the Southern Hemisphere. With the Daniel House renovations and increasing student demand, we needed to expand our options. I began looking for alternative locations that would give our students a wide variety of ways to engage the arts, but also had a cultural history that was different from the Eurocentric one we experience in London. It was also important to find a location that could also be attractive for other schools across Samford and that could potentially provide opportunities for collaboration and integrated study.” At the same time Cory was researching alternatives, the Global Engagement Office began expanding their work with CAPA that has a study-center in Sydney. Sydney provided a global city with a large menu of events and activities, but it also has the connection with the Aboriginal history and tradition. After discussions with the Global Engagement Office, Cory was encouraged to develop this opportunity for students.

In Sydney, the SOA 200 course used the arts as a way to engage with Sydney’s history and culture. Highlights included learning about Aboriginal culture, attending multiple performances and touring the iconic Sydney Opera House, visiting galleries, exploring Sydney’s architectural history, visiting multiple churches, and hiking in the Blue Mountains and along the Pacific coast.

Cory said, “Other unexpected highlights were observing how globally connected Australia is to Asia, learning about Australia’s political system and viewing issues from a different perspective, and experiencing the natural environment and the effects of climate change with the bush fires. These things gave us much to discuss and were reflected in much of the art we experienced.”

In London, Arts in Society students learned from the ample theatrical and artistic resources of the city with visits to museums, backstage tours and theatre attendance in a course led by David Glenn and Lauren Evans. In Dublin, the class studied the value of artworks and aesthetics in human societies with particular attention to Irish culture in a class taught by Ryan Misner and Mark Lackey.

Summer SOA 200 and ART 480 programs are already planned in London with Chelsea Nicholson and in Italy with Jeannie Krumdieck and Scott Fisk. Other notable abroad experiences include School of the Arts’ A Cappella Choir’s trip to France in May to compete  in the Florilège Vocal de Tours International Competition for Choral Singing and theatre students’ participation in the world’s largest arts festival in Edinburgh, Scotland in August.