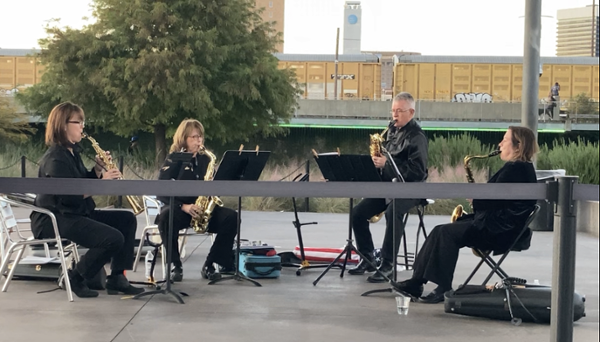 Samford Arts faculty are accomplished teaching artists who perform, compose and create their art to be shared locally, nationally and internationally.  This fall, Joel Davis, a music professor and composer, has been fortunate to have his work performed both in Boston and in Birmingham.

As a former Lilly Graduate Fellow, Davis participated in the  31st Annual National Conference of the Lilly Fellows Program: "Science, Faith, and the Common Good” in October in Boston.  The event included a Vespers Service with a  world premiere preview performance of an excerpt from Davis’ sacred cantata-in-progress, Sudden Light. The critically acclaimed Seraphim Singers of Boston performed the piece under the direction of Jennifer Lester at Boston College. The Seraphim Singers were accompanied by Alicia Cordoba Tait on oboe and Heinrich Christensen on piano. The piece, which is dedicated to Dr. Mark Schwehn, the LFP's Founding Director, was originally commissioned for the 30th Annual LFP National Conference; however, due to the pandemic, last year's conference took place virtually, so Davis participated in a Zoom plenary panel discussion in lieu of having his music performed at that event.

In addition to the world premiere of his work, Davis participated in an artist panel discussion with two other composer alumni from the Lilly Graduate Fellows Program.  An added bonus of the trip was connecting with several Samford alums currently living in Boston.  Madison Hablas and Nathan Peace are both pursuing graduate degrees and Maggie Boswell Senyshyn is working  and teaching there, after having earned an MM in Composition and a Graduate Performance Diploma from the Longy School of Music of Bard College.  “This was the single biggest highlight of the weekend for me. There is no greater reward for a teacher than to see our Samford Arts alumni thriving in their lives and post-Samford careers,” said Davis.

Upon his return to Birmingham, Davis had another new piece premiered by the Cahaba Saxophone Quartet at a Birmingham Art Music Alliance (BAMA) concert at Railroad Park.   “Railroad Park Variations were composed expressly for the ensemble to perform at this outdoor concert. All of the music in the program was inspired by, and in reference to Birmingham’s Railroad Park,” said Davis.

Davis teaches both composition and theory at Samford and says that he enjoys his front row seat to students’ creativity.  His professional career helps inform his teaching.  “From a teaching standpoint, I have found that my own ongoing work as an active composer, arranger, and performer helps to inform my pedagogy. As a result of my experiences––positive, negative, and all points in between––I am able to talk with my students about real world scenarios and practical applications of their work as professional artists. By drawing upon my background in rehearsal, studio, and live performance settings, I am better equipped to prepare my students for the situations in which they will find themselves as they continue their work as professionals in the field,” said Davis.