Patty McDonald, a Champion of the Arts in Birmingham 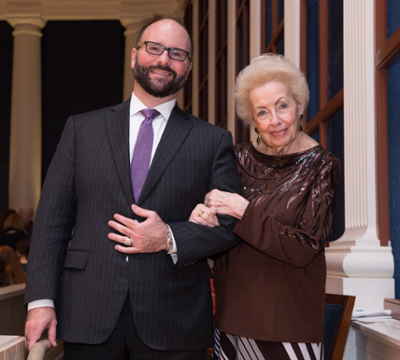 Patricia "Patty" McDonald of Birmingham, Alabama passed away on Wednesday, November 24, 2021. Patty was a devoted arts philanthropist and community leader, supporting a multitude of organizations and activities at Samford and in the greater Birmingham community.

Patty championed the arts as a performer, sponsor, mentor, and as a tireless advocate for the role that theater, music, and dance played in the development of the community. As an actress, Patty appeared in many memorable performances including the role of Melissa in Virginia Samford Theater's Love Letters and Glinda, the Good Witch in Red Mountain Theater's The Wizard of Oz. As a leader, Patty served on the advisory boards of the Alys Stephens Center for the Performing Arts; the Alabama Ballet; Opera Birmingham; Red Mountain Theatre; Virginia Samford Theatre; Birmingham Music Club; Samford University School of the Arts Advisory Board; VSA Arts of Alabama; Oasis Counseling for Women and Children; Steel City Men's Chorus; and served as Honorary Chair for Birmingham AIDS Outreach Arty Party. Patty was a Sustaining Member of the Women's Committee of 100 for Birmingham. She also served on the Board of Directors for the City of Birmingham's Arlington House Museum for many years. Patty supported arts education and established several scholarships in the belief that a strong commitment to education through the arts provided opportunities.

In recognition of her contributions to the Birmingham and Alabama arts communities, Patty was honored by the Alys Stephens Center for the Performing Arts with the "Volunteer in Philanthropy" award and received the Red Mountain Theatre's first "Star Award." She was also named a "Star" by Opera Birmingham and received the "Outstanding Service to the Community" award from the Birmingham Area Theatre Alliance. In 2020, Patty was selected by the Alabama State Council on the Arts to receive the Albert B. Head Council Legacy Award, the highest arts honor given by the state of Alabama.

She was preceded in death by her husband, Robert "Pat" McDonald, and is survived by her daughter Patricia Rote of Hamilton, Virginia, a Samford graduate.