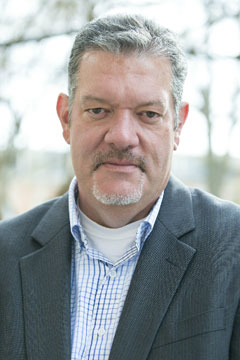 Samford’s Provost Mike Hardin announced that Larry Thompson will be the interim dean of the School of the Arts following the departure of Dean Joe Hopkins who will be Campbellsville University’s next president starting on Feb. 1, 2022. Thompson currently serves as associate dean and art professor in the School of the Arts.

In his new role, he hopes to foster the momentum of the School of the Arts  but may draw the line at continuing some of Hopkins’s  traditions. “Joe hired me his first year at Samford, and so my entire Samford experience has been working alongside Joe Hopkins, but everyone who has worked with me knows I’m very different from Joe – I won’t sing at graduation or wear a bow tie,” said Thompson.

However, Thompson does hope he can help further Hopkins’ emphasis on inter-departmental collaboration. “Joe has helped establish a really strong foundation, especially in this culture of working together. One thing Samford has helped me with is not becoming myopic, staying in my visual arts world. I’ve worked very collaboratively with a pianist (his work with former Samford pianist Kathryn Fouse, Aural Vision: Art Inspired by Sound, has been performed and exhibited on three continents) and taught with my theatre colleagues. And I once played basketball. So, when I met with the five department chairs and talked with them about accepting this interim role, I equated it to working together to keep the momentum going, maintaining the collaborative relationships we have started, including some of the curriculum, and navigating this transition into the next chapter of what the School of the Arts will be,” said Thompson.

Thompson also credits the school’s recent growth trajectory to “people who worked very hard to figure out a way to still be artists and create in their own ways in a time when a lot of people just gave up,” said Thompson. While students at other schools reported working from home during the pandemic, Samford’s School of the Arts found creative ways to support students in their work.

That supportive atmosphere extends to faculty and staff, too. “This school’s faculty and staff have been with me from day one of my wife’s cancer journey,” said Thompson of Amy Nichol's sudden cancer diagnosis last April. Despite aggressive treatments, she died October 5. While Larry carefully pondered whether he should accept new responsibilities after such a recent loss, he has taken comfort in his Samford family’s support. Colleagues recently participated in a blood drive in Amy’s memory.

Thompson’s recent work, Fluid and Cells: 160 Days of Cancer, Chemotherapy and Courage, will be part of a faculty show Jan. 13-Feb. 3 in the Samford Art Gallery in which he used fluid paint, blowtorches and air guns on small panels to compose a large grid memorializing Amy’s treatment and legacy. Individual panels will be sold to benefit a nonprofit foundation for cancer patients in need established by Amy’s Grandview Medical Center oncologist. Amy served Jefferson County Department of Health patients as Spanish language medical translator and department coordinator at the central clinic.

Larry’s visual art has been acclaimed internationally. And like his colleagues, he is willing to share what he has learned about art and leadership. As interim dean, he hopes to help the school prepare for what comes next on what he calls “a train moving pretty quickly in the right direction.”

“I’m personally navigating into uncharted waters, but I think Joe has helped establish a really strong foundation, especially in terms of different areas coming together and working collaboratively,” he said. “That’s what will help us bridge to our next dean, in that there is this culture of working together. It really is a spirit of figuring out what we have in common as artists. We share a common language of creativity. That’s helped foster this culture of what we do have in common, and building on those. Going back to my basketball analogy, I believe that, if we can all work together in that way as a team, then we win.”