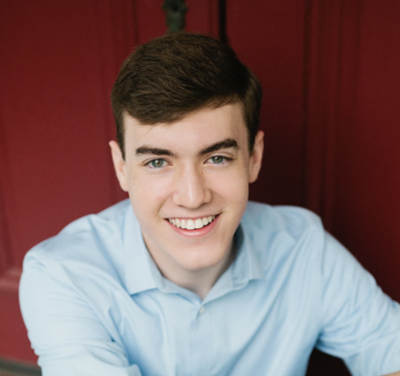 Samford graduate student Blake Mitchell recently received several honors for his composition work.  His collaboration with Samford student and poet Margaret Kirby, Where Sky Meets Sea, was announced the winner of the Walter Hussey Composition Competition  2020.  The Reading Phoenix Choir performed the World Premiere of Where Sky Meets Sea during its New Horizons concert, at the Great Hall, University of Reading in Reading, Berkshire, England on Saturday, March 5th.

Additionally, Mitchell won second place in the American Choral Directors Association’s 2022 Pearl Prize Competition with his new work, When Storms Arise, a setting of sacred text by Paul Laurence Dunbar.  Mitchell’s work O, Come Thou Fount, another collaboration with Kirby was performed by the Samford A Cappella Choir at the ACDA Southern Regional Conference in Raleigh in late February.

The Pearl Prize Competition’s aim was “to foster new works for volunteer choirs (community or church choirs, as well as school choirs)." Entries were judged on the criteria of being "eloquent yet simple and creating maximum impact with minimal difficulty.”

“I have a file where I save poems and texts that I believe could potentially be used in future pieces. This particular text seemed incredibly timely with its messages of hope and peace in times of uncertainty. I redrafted the piece that best fit the text a handful of times, before committing to the approachable and effective nature of the final piece,” said Mitchell about inspiration for When Storms Arise.

Mitchell is currently pursuing a fifth-year non-traditional music education degree at Samford.  He is a May 2022 graduate of Samford.  He is a member of the Samford A Cappella Choir and continues to develop his composition work. After completing his graduate work at Samford,  Mitchell said, “ I plan to teach voice and/or choir as well as music direction for musical theatre. I hope to continue growth in the composition and arranging areas as much as I can!”

“Blake Mitchell does it all: he is a first-class composer, arranger, vocalist, multi-instrumentalist, collaborator, and educator. He continues to garner awards, commissions, publications, and performances from esteemed ensembles and publishers around the country, which is a credit to the quality and craft of his creative work,” said Joel Davis, associate professor of music who has mentored Mitchell in composition works.

Through his experience at Samford, Mitchell has been able to hone his vocal and composition skills.  He credits Samford for exposing him to “ a variety of music within the realm of choral music and beyond that has shaped how I write. The exposure to educational approaches also has had an effect on writing for choir in a way that sets singers and instrumentalists up for success,” said Mitchell.

“I have been privileged to work with Blake during both his undergraduate and graduate studies here at Samford, and I am proud of him for continually seeking out opportunities to share his music with others. It is truly a joy to have a ‘front row seat’ to the accomplishments of Blake and his fellow students,” added Davis.