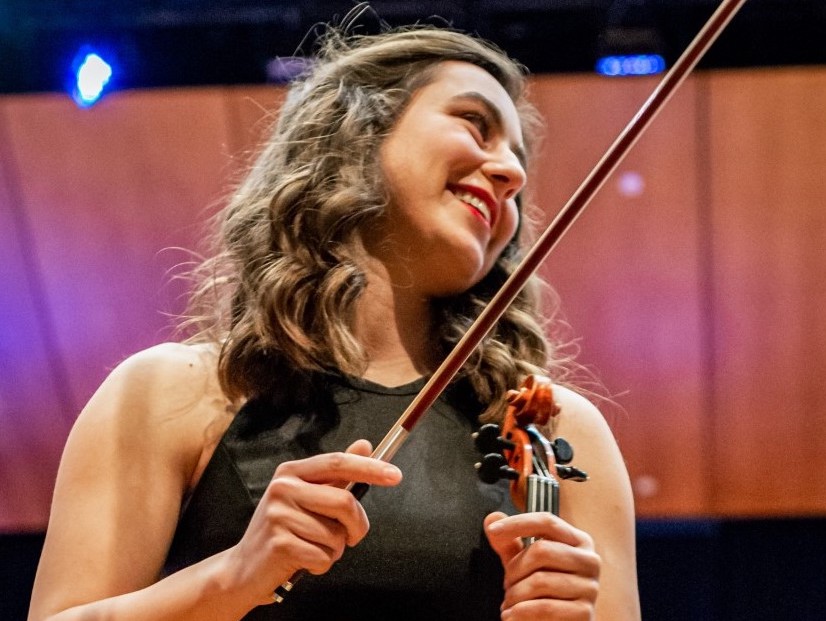 In the summer of 2021, sophomore Rebekah Willard entered the Samuel Fordis Young Artists Concerto Competition via a video audition that was followed by a live audition in November. She won first place in the virtuoso category, and as a part of the award, she was invited to perform with the Georgia Philharmonic on February 19, 2022. She played the first movement of the Korngold Violin Concerto.

“I decided to enter this competition because I thought it would be a great experience to have a chance to solo with an orchestra. The piece I soloed is very diverse, lively, and extraordinary, and the orchestra really brought it to life,” said Willard.

“This concert was truly a momentous moment in my career, and one of many to hopefully build on in the future. I felt at true peace knowing that this is what the Lord has called me to do. I felt a sense of awe, but also excitement and contentment,” Willard said of the performance.

“Samford has assisted me in taking these opportunities by being extremely supportive and encouraging. The music faculty encourages all of their students to do their best and work hard to maintain a healthy, positive, and professional attitude in every aspect of life, not just music. This has strengthened me not only as a musician, but as a person, and Lord willing, I hope to continue to grow and mature in this way in the days to come,” Willard said.

At Samford, Willard is a member of the Samford Orchestra, Worship Arts Ensemble and Student String Quartet while pursuing a Bachelor of Music, with a minor in social entrepreneurship. Besides her passion for the violin, she is actively involved in ministry areas at her church, enjoys singing, piano, and photography.

Willard is from Jackson, TN., and has received numerous accolades. She has performed as a soloist with the Samford University Orchestra, the Gulf Coast Steinway Society Orchestra in Mobile, Alabama, the Alpharetta Symphony Orchestra and the Georgia Philharmonic where she debuted at age 11. She was the Senior Strings Performance First Place winner for the MTNA auditions for the state of Georgia in 2017, the GMTA Concerto Competition Winner for 2017, and was a featured performer at the GMTA Conference that year. Rebekah was the second-place winner in 2019 and the third-place winner in 2018 for the Georgia District of Kiwanis International Music Showcase of Georgia. Rebekah was the Junior Strings Performance Winner representing Georgia in MTNA national auditions in 2015. She was the 2011 Winner of GMTA and was chosen Conference Recitalist, performing on the Winners recital of the GMTA Annual Conference.

In 2017, Rebekah was selected to attend the elite National Youth Orchestra (NY02) summer program hosted by the Carnegie Foundation in New York, where she performed in master classes for Pamela Frank, Daniel Han, and Paul Arnold. She has also had the privilege of performing in master classes for Stephen Clapp, Brian Lewis, and Timothy Lees, In 2015 Rebekah performed as a soloist and ensemble member on the Grand Old Opry Stage and the Bluegrass Underground in Tennessee. In 2011, she was selected by audition to perform in Carnegie Hall as part of the Heritage Series with the True North Orchestra.

In 2010, Rebekah began studying with Sonja Foster, a Juilliard School and Curtis Institute alumna who has a private studio for the gifted in Atlanta. Rebekah started the violin at the age of 5 with Anne Blyth of Albany, Ga. Currently, Rebekah is studying with Jeff Z. Flaniken, a Cincinnati-College Conservatory and Philadelphia College of Performing Arts alumna at Samford.