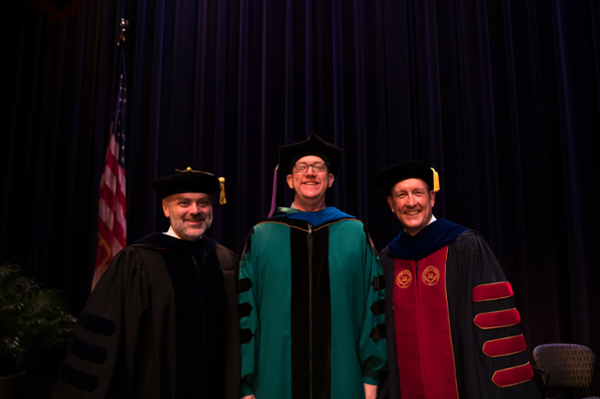 Dean Chad Carson, Professor Art Carden, President Beck A. Taylor
Samford University held its 180th opening convocation Tuesday, Aug. 31, 2021, during which three annual employee awards were presented. Art Carden, professor of economics in Brock School of Business, was awarded the Outstanding Faculty Scholarship Award which recognizes sustained scholarly contribution to a faculty member’s discipline and academia over the course of their career.
Carden, an internationally recognized economics scholar, exemplifies the true essence of the award. His research on mass-market retailers, economic history, and the history of economic ideas has appeared in journals like the Southern Economic Journal where he serves as the coeditor, the Journal of Urban Economics, Public Choice, and Contemporary Economic Policy. New research by Carden is forthcoming in the Journal of Private Enterprise and Business Ethics Quarterly. He is a frequent contributor to Forbes.com and the American Institute for Economic Research (AIER). His commentaries and other articles have appeared in USA Today, Productive!, Black Belt, and many other national and international media outlets. A collection of Carden commentaries titled Strangers With Candy: Observations from the Ordinary Business of Life, will soon be published by AIER.
His first book, coauthored with renowned economist Deirdre McCloskey, Leave Me Alone and I’ll Make You Rich: How the Bourgeois Deal Enriched the World, was published in 2020. In November of that year, the book topped the Amazon charts for new releases in numerous categories.
In addition to his research, Carden is a senior fellow with the AIER and the Fraser Institute; a research fellow with the Independent Institute; a senior fellow with the Beacon Center of Tennessee; and a senior research fellow with the Institute for Faith, Work and Economics.
He said, “It’s a high honor to be recognized by colleagues who continue to build a culture of scholarly excellence. Samford’s Brock School of Business has been a wonderful academic home that has made it possible for me to produce the scholarship this award recognizes.”
Carden received his bachelor’s and master’s degrees in economics from the University of Alabama and holds a Ph.D. in economics and a graduate certificate in New Institutional Social Sciences, both from Washington University in St. Louis.
“This recognition for Art is a significant milestone achievement,” said Dean Chad Carson. “Through his scholarship, Art sets the bar for his peers in the economics discipline, nationally and internationally. We are beyond proud that he is a part of our Brock School of Business faculty.”
Carden is the second Brock School of Business professor in three years to be presented with this award. Archie Lockamy, the Margaret Gage Bush professor of business, received the award in 2019.
Samford is a leading Christian university offering undergraduate programs grounded in the liberal arts with an array of nationally recognized graduate and professional schools. Founded in 1841, Samford is the 87th-oldest institution of higher learning in the United States. The Wall Street Journal ranks Samford 1st nationally for student engagement and U.S. News & World Report ranks Samford 37th in the nation for best undergraduate teaching and 97th nationally for best value. Samford enrolls 5,758 students from 48 states and 22 countries in its 10 academic schools: arts, arts and sciences, business, divinity, education, health professions, law, nursing, pharmacy and public health. Samford fields 17 athletic teams that compete in the tradition-rich Southern Conference, and ranks 3rd nationally for its Graduation Success Rate among all NCAA Division I schools.
Marketing and Communications Manager
Morgan Black
mblack3@samford.edu
205-726-4753