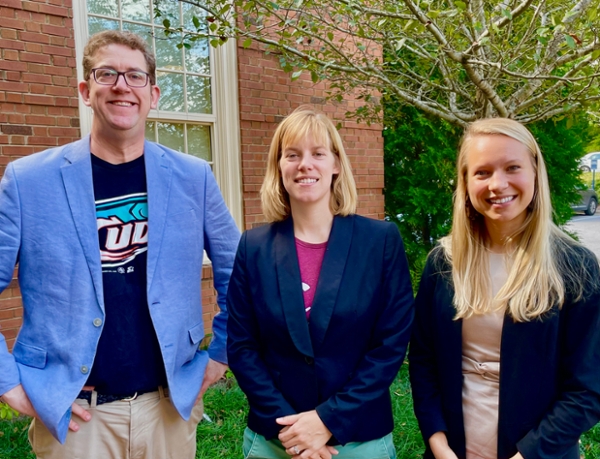 Carden, Buchanan, Piano
Samford’s economics program was well represented at the Southern Economic Association annual conference in Houston, Texas, Nov. 20-22, 2021. Economics professors Joy Buchanan, Art Carden and Clara Piano each presented their work in multiple sessions, and recent graduate Hannah Florence ’21 presented her project she completed as part of the American Enterprise Institute’s (AEI) Young Scholars Program.
Buchanan presented her new paper “Other people’s money: Preferences for equality in groups,” which recently appeared in the European Journal of Political Economy. In the paper, she and coauthor Gavin Roberts of Weber State University’s Goddard School of Business & Economics highlight the concepts that people are not likely to spend a lot of their own money on decreasing inequality in a laboratory environment but they are more likely to purchase equality if they can spend other people’s money. People purchase less equality when the price increases and individuals make similar decisions in dictatorial and voting environments.
Carden presented “Patenting Reexamined: Evidence from the United States 1900-1950” which he coauthored with Sinclaire Green ’21, now in the economics Ph.D. program at the University of Alabama. He also presented “Consumer Sovereignty and W.H. Hutt’s Critique of the Colour Bar” which he wrote with Phillip W. Magness from the American Institute for Economic Research and Ilia Murtazashvili from the University of Pittsburgh. Also at the conference, Nathanael Snow of Ball State University presented “Discussion, Dictation, and Decisions Among Natural Equals” which was coauthored with Carden and Jaime Carini of Indiana University-Bloomington.
Carden is also the coauthor of a new piece, “The Vital Two: Retail Innovation By Sol Price and Sam Walton,” which he wrote with Samford’s Assistant Professor of Management Reggie Harris and Charles Courtmanche of the University of Kentucky. Their research highlights how the two entrepreneurs changed retail in the 20th century and has been accepted for publication by Essays in Economic and Business History.
Clara Piano, one of the newest members of Samford’s economics faculty, presented her paper “Ubi Caritas? Some Economics and Ethics of Universal Basic Income.” This paper, coauthored with Catherine Pakaluk of the Catholic University of America, investigates the case for and against a universal basic income (UBI) program, concluding that a UBI is both economically unsustainable and ethically confused. In particular, they argue that by disconnecting labor from its fruits, a UBI program would harm political, economic and familial relationships.
Piano is also the coauthor of “Does marriage protect mental health? Evidence from the COVID-19 pandemic,” a new article recently published in Social Science Quarterly. The research, coauthored with Christos Makridis of Stanford University, highlights the surge in unemployment over the coronavirus pandemic and how it effects mental health outcomes and the role of marital status as a protective factor for households.
Hannah Florence ’21 presented her AEI Young Scholars Project “It Takes a Village to Care For a Boomer: The Effect of Diminishing Social Capital Among Baby Boomers on Formal and Informal Care.” Her research examines how the declining levels of social capital among Baby Boomers will exacerbate a growing elderly population's challenges and aims to clarify how current retirees will impact the health care system and expenditures to Medicare and Medicaid in the decades to come. Florence was the first Samford student to be selected for AEI’s Young Scholars Program in 2020 and is now employed by AEI at their headquarters in Washington, D.C. Current senior Sydney Rennich was selected for the prestigious Young Scholars Program this year.
Carden said, “It’s always fun to showcase our commitment to student engagement by getting our students’ research in front of audiences at international conferences. Along with excellent presentations of cutting-edge research by our newer faculty members, our presence at the Southern Economic Association conference showed how we set out challenge your mind and nourish your spirit in Samford’s economics program.”
Samford is a leading Christian university offering undergraduate programs grounded in the liberal arts with an array of nationally recognized graduate and professional schools. Founded in 1841, Samford is the 87th-oldest institution of higher learning in the United States. The Wall Street Journal ranks Samford 1st nationally for student engagement and U.S. News & World Report ranks Samford 37th in the nation for best undergraduate teaching and 97th nationally for best value. Samford enrolls 5,758 students from 48 states and 22 countries in its 10 academic schools: arts, arts and sciences, business, divinity, education, health professions, law, nursing, pharmacy and public health. Samford fields 17 athletic teams that compete in the tradition-rich Southern Conference, and ranks 3rd nationally for its Graduation Success Rate among all NCAA Division I schools.
Marketing and Communications Manager
Morgan Black
mblack3@samford.edu
205-726-4753