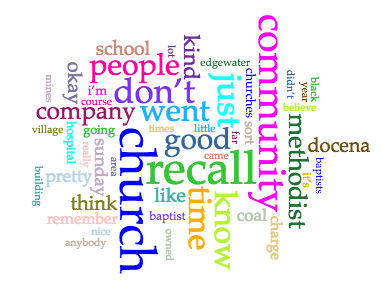 "These people were very likable, hard-working, and that’s hard work, dangerous living. They felt pretty close to each other. They helped each other, somebody in the community got in trouble, then food, whatever was needed, the whole community rallied in that direction."

E.L. McFee explains his affiliation with Edgewater Methodist Church South and his role preaching at Docena and Edgewater.
Play Segment

E.L. McFee describes the church at Docena and his role in it.
Play Segment

Challenges in the Docena Congregation

E.L. McFee describes some of his difficulties during his time as pastor in Docena, including a small congregation, a pervasive fatalism, and the abundance of injuries from mine work.
Play Segment

Memories of the Docena Congregation

The Town of Docena and Closing Remarks

E.L. McFee describes some facets of life in Docena, including education and politics, and makes some final comments on his experiences.
Play Segment