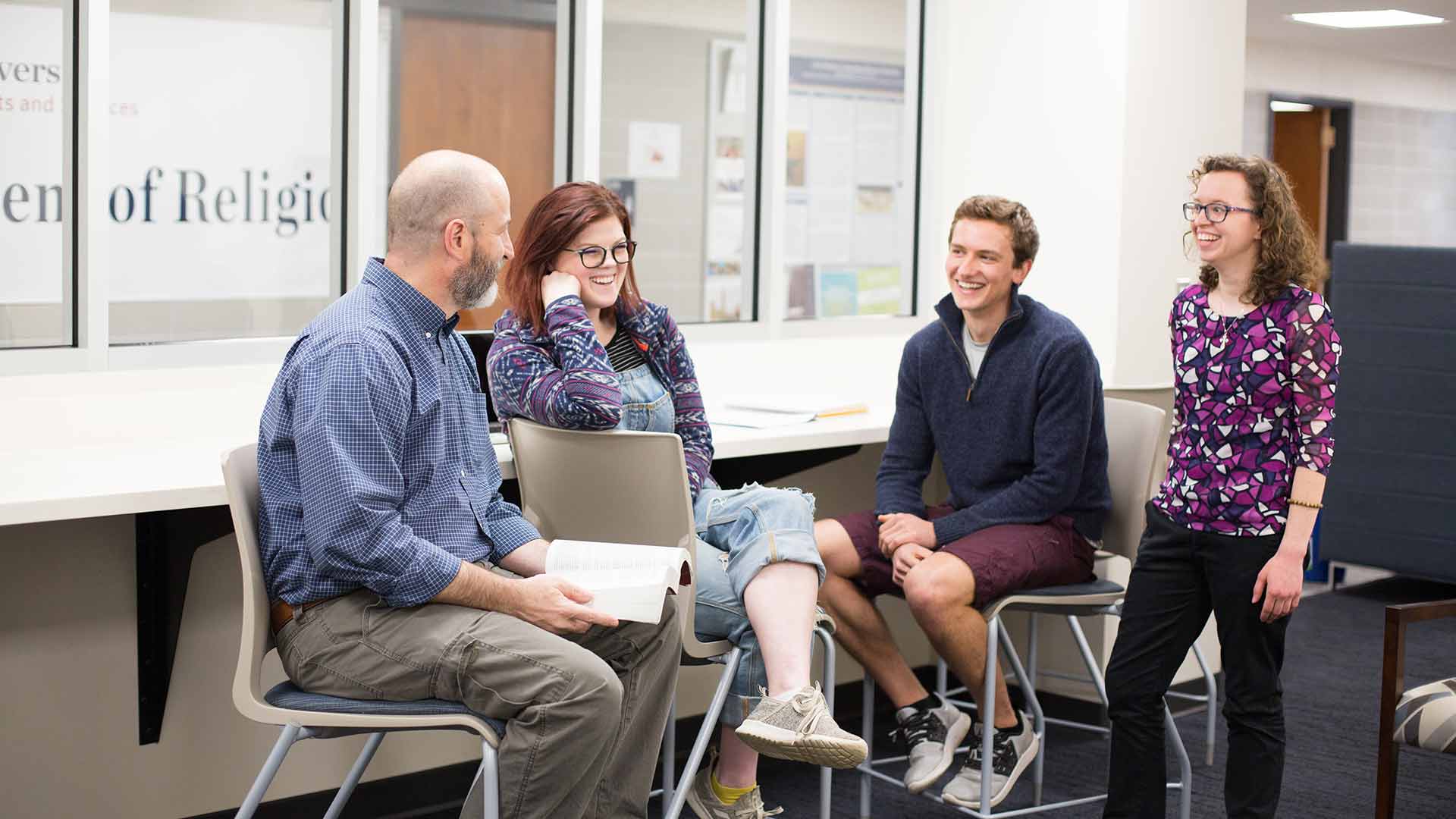 We partner our academically rigorous classes with practica and internships that link the intellectual work of the classroom to ministry in daily life.

Now more than ever, the world needs men and women who combine vibrant faith in Christ with a commitment to academic excellence. Samford’s Department of Biblical and Religious Studies is here to help you do just that.

You’ll dig deeper into the Bible, theology, church history, and ministry than you ever thought possible. Along the way, you’ll consider the way Christianity interacts with sociology, philosophy and the many different religions that shape our world. You’ll get to explore challenging questions in a community of faculty and students who seek to love God with all their hearts and all their minds. "The department has allowed me to grow both in my scholarship and in my personal faith. Learning some of the hard truths of the Bible has only made me fall in love with God's word more. Leaving the department, I have a greater desire to know the Lord more than I ever have."Jessica McCasland '21, Biblical Studies

You’ll also lay a foundation for a lifetime of discipleship and service. You can tailor your program to focus on preparation for ministry by emphasizing courses in subjects like preaching, missions, and pastoral care and taking advantage of our many internship opportunities. You can design your program to prepare for further study in seminary or grad school by taking courses in Bible, theology and history. You can also study Hebrew and Greek, attend the Holley-Hull, Robbins and Dotson Nelson guest lectures, and even spend a month learning to be an archaeologist in the land where Jesus lived.

"The Biblical and Religious Studies Department at Samford is so different from anywhere else. At Samford, we truly have some of the brightest Biblical scholars in the world, but more importantly, the department truly cares about me and my spiritual formation."James Martin ' 25, Biblical Studies

Preparing for Your Calling

Whether your calling is to be a pastor, preacher, missionary, youth worker, educator, academic, social worker, or community leader, the Department of Biblical and Religious Studies is the place where you can combine the best of rigorous Christian scholarship with a commitment to transformative ministry preparation.

About the Department of Biblical and Religious Studies

We are dedicated to serious scholarship rooted in faith. We are devoted to the great tradition of Christian orthodoxy enriched by multidisciplinary and interdisciplinary research.

We seek to model the integration of a vibrant faith in Christ with a commitment to pursuing academic excellence in the highest tradition of Christian scholarship in the teaching of biblical studies, Christian theology and ministry, as well as the history, sociology, and philosophy of religion.

We believe that the future of leadership in Christian ministry, theological education, and cultural engagement in all spheres of life depends upon women and men being equipped with the necessary tools and foundations to understand how faith informs and transforms every endeavor to which one might be called.

We are driven by the conviction that serious academic work in religious studies, informed by the richness of the Christian intellectual and moral tradition, prepares students for leadership in many kinds of careers, and equips them to play transformative roles in whatever context they may find themselves.

Students are mentored by faculty members who are experts in their fields and passionate about their work. At graduation they are prepared to take positions of leadership in missions and ministry roles as well as other transformative callings, or to pursue further education in seminary or graduate school with a view to a career in religious and theological education.

Faculty Engagement in Mission and Ministry

Samford students may be inducted into the Alpha Iota Epsilon chapter of Theta Alpha Kappa, the National Honor Society for religion and theology. Since the induction of its first class of members in 2008, Samford’s chapter of TAK has played a vital role in helping students integrate the academic study of Christian and religious studies with a commitment to faith. This commitment continues today through TAK’s hosting of various academic lectures and especially its sponsorship of Christian Faith and Critical Thought Colloquia in the fall and spring of each academic year. To qualify for membership in Theta Alpha Kappa, students must have completed a minimum of twelve semester hours in religion courses (RELG or UCBP), while maintaining a 3.65 GPA in those courses. Additionally, students must maintain a GPA of 3.0 or higher in their total academic program and must rank in the top 35% of their class at the time of induction. Students’ academic records are reviewed on an annual basis to determine their eligibility for membership in TAK. Students who believe they may have met the qualifications for entry into TAK or who are interested in learning more about Samford’s TAK chapter may contact the chapter’s faculty moderator, Rony Kozman.

We are privileged to give seven awards at the end of each academic year.

The Herman Ross Arnold Award is endowed in memory of this Baptist minister, who served in Alabama for fifty-three years. It is given to the graduating ministerial students who, in the opinion of department faculty and students, have best exemplified Christian humility and unselfish service and have best applied to the improvement of the mind. Since 2004 it is typically given to two students a year.

The Community of Scholars Award is given each year to a student who has made significant contributions to the development of scholarly community within the Department of Biblical and Religious Studies. It is typically given to a junior. In the spring of odd-numbered years, this takes the form of the Theta Alpha Kappa Undergraduate Achievement Award. This award was first given in 2009.

The Cowley award is named for former missionary and religious education professor William Cowley. It is given to a student demonstrating excellence in scholarship, leadership, and commitment to ministry.

The Samford Sunday Award is given in gratitude to the student director or directors who oversee the Samford Sunday preaching program. Directors network with Alabama churches and coordinate Sunday preaching opportunities for Samford students. This program was inaugurated in 1948 by Samford ministerial students, and it celebrates ongoing relationships between the university, the Alabama Baptist Convention, and churches from other denominations. Directors play a vital role in representing the department and the university to our wider constituents in local churches. This award was instituted in 2013.

This endowed award is made annually to graduating seniors who are preparing for a church-related vocation and who have demonstrated both performance and promise. It is given to students who have shown initiative, compassion, and who have been involved in a Baptist church. It is typically given to two students a year.

The Carlton F. Whirley award is given to the graduating senior who has already committed himself or herself to a career in missions, who in his or her life as a college student has demonstrated commitment to missions, and who through his or her school work has expressed commitment to learning. Three areas in the student’s life are embraced in these qualifications: scholarship, the practice of missions here and now, and commitment to a career in missions in the future. These qualifications reflect the life of Dr. Carlton F. Whirley, who for 33 years served faithfully as a Southern Baptist missionary to Nigeria.

Samford to Host Biblical Scholar, Author from Australia
On Tuesday, Nov. 15, Rosner will come to Samford University as the Department of Biblical and Religious Studies Holley-Hull lecturer to discuss his book, How to Find Yourself: Why Looking Inward is Not the Answer.
Full Story