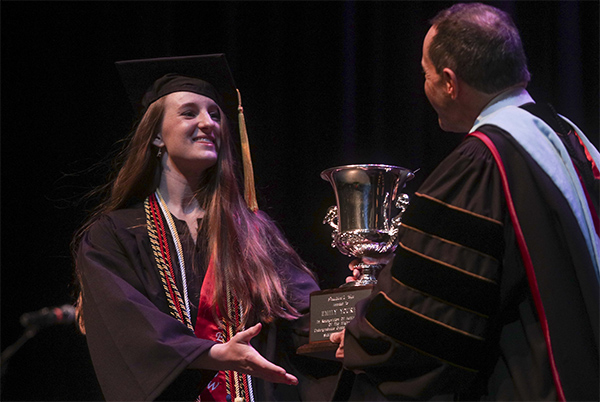 College dean Timothy Hall joined university president Andrew Westmoreland and provost Michael Hardin in recognizing the Class of 2019, and introduced Lipham, a history alumna who serves as the managing director for Wells Fargo Advisors in Anniston, Alabama. Lipham is a founding member of the college’s advisory board and helps fund international study scholarships. The History Department honored her as its 2011 Alumna of the Year in recognition of that exceptional support for Samford and for her ongoing engagement with her undergraduate degree, including through the preservation of antebellum architecture in Alabama and South Carolina.

Lipham offered advice she received from Samford mentors and other influential figures, which she said has served her well in life. The graduates should embrace their individuality, be true to themselves and be resilient in the face of adversity, she said. She emphasized that life is full of petty slights and opportunities for self-pity, but to live with a sense of victimhood is to miss opportunities for real happiness. “When you turn loose of the pettiness of the world and appreciate the day-to-day, your life will be incredibly richer,” she said. “It will help you feel the joy and peace that comes from God.”

Lipham left the graduates with a thought from Alabama native Helen Keller, whose lack of hearing and sight did not deny her an inspirational life of writing and activism­. “One can never consent to creep,” Keller wrote, “when one feels the impulse to fly.”

The university presented several special honors at the ceremony.

Hardin announced that Samford’s Board of Trustees this week conferred upon college alumnus Ernest Dewey Walker ’49 the degree of Doctor of Divinity honoris causa, in recognition of what Hardin described as “extraordinary service to humankind.”

Walker, a World War II combat veteran of the United States Marine Corps, has enjoyed a distinguished career in ministry, including 30 years as pastor of First Baptist Church of Valparaiso, Florida, where Hardin was one of hundreds of people Walker taught and inspired.

Illness prevented Walker from attending Saturday’s ceremony, but his son, Steve, was on hand to receive the honor. The elder Walker, commenting via a letter to Hardin, expressed his thanks and gratitude to the Samford community “for making my homecoming an even greater victory.”

English major and University Fellows honors student Emily Youree earned the President’s Cup, which honors the graduate with the highest GPA across the entire university.

Communication studies major Lucy Kate Green earned one of two John C. Pittman Spirit Awards, which honors students who consistently exhibit exceptional Christian character in community life. The award is given in memory of the 1944 alumnus who served 62 years as a trustee. His nephew, W. Randall Pittman, Vice President for University Advancement, presented the award to Green.

Retiring faculty Sandra Willis, Bill Collins and John Mayfield were recognized at the ceremony, and Associate Dean Emily Hynds led a moment of reflection on the passing this year of faculty colleague Steve Donaldson and student Griffin Dobbs Vickers, who was awarded a posthumous degree in public administration.

Outgoing senior class president and public administration major John Collier offered a farewell address in which he reflected on how quickly four years seemed to pass. He told the graduates that the rest of life is likely to pass in much the same way, with no single, spectacular event to propel them, but rather “a series of choices, moment by moment, day by day.”

Collier said the graduates might never see what he described as “the top of the mountain,” and should instead focus on making “the right next decision.” He shared with them his own reminder of how to proceed in hard times: “Do your best and let God take care of the rest.”