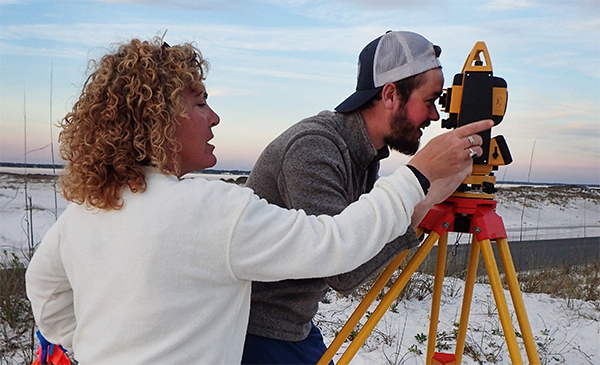 Forrest Courtney ’19 came to Samford undeclared but with thoughts of a career in law. It made perfect sense. In high school, he demonstrated talent in public speaking, served as a Teen Court prosecutor, and participated in the Kentucky Youth Assembly and Kentucky United Nations Assembly. Although he was a lifeguard, a career in the ocean would have seemed far-fetched. He didn’t like to wade past his waist on family visits to the beach. “I saw Jaws way too early,” he joked.

Now the geography major is a certified professional diver with an impressive record of coral reef research and preservation. The short story, common at Samford, is that he found mentors who encouraged him to try something new and invest in something meaningful for him and the world.

“I went to Saba my freshman year Jan term with Dr. Rahn, and it totally changed everything for me,” Courtney said of his transformative introduction to life outside the U.S. and to the coral reef research and preservation project on the Caribbean island of Saba. That project and culture have been geography professor Jennifer Rahn’s passion for decades.

Courtney then took professor Jennifer Speights-Binet’s introductory geography course and loved that, too. Study of geographic information systems (GIS) with Rahn drew him further into the discipline and led him to serve as Rahn’s teaching assistant. He applied for, and received, a Howard College of Arts and Sciences Aspire research grant for more work on Saba with Rahn.

“It was incredible to see how much everybody down there loves Dr. Rahn,” Courtney said. The lasting relationships she found in the Saba community helped him see that preservation of coral reefs isn’t purely a scientific endeavor—there are sociological aspects of the work, policy and legal considerations, communication challenges and other concerns. Professor Hugh Floyd’s Sociology of the Environment course and a Jan term biology course in Uniontown, Alabama, with professor Betsy Dobbins further helped prepare Courtney to address those complex issues. “Understanding that social side has changed the way I interact with people, and changed the way I’ve wanted to do my work in the future,” he said.

When Courtney earned an internship with the Coral Restoration Foundation (CRF,) the largest coral restoration group in the world, he found himself working alongside marine biology students from coastal universities. At first, he was somewhat intimidated by their experience and deep, specialized knowledge of the biological aspects of their work. He held his own in that research and discovered that his education had also equipped him to see the broader picture. “What quickly came to light for me is how versatile my Samford education has made me,” he said. In the geography major especially, “they teach you to think differently, think spatially.”

Samford faculty also helped Courtney believe that he really could meet all the challenges before him. “I didn’t come in with a whole lot of confidence,” he said. “That’s been a huge part of Samford—how encouraging everyone has been.” When Courtney presented his and Rahn’s research on a stage at the international Reef Futures conference in 2018, he wrote in his notes  “You can do this!”

“It was weird to feel like that,” he said, “because nothing in my education has ever been like that."

In turn, Courtney has nurtured that confidence in younger students and helped prepare them for the kinds of experiences that transformed his ideas about what he could do. Recently, when a student asked him about the geography major, Courtney remembered his academic journey and encouraged her to give it a try but be open to different possibilities. “You’re engaged in your education and taking ownership over it,” he said, “and if you’re willing to do that, it doesn’t matter what you go into because it’s Samford—they’ll give you the tools to succeed.”

The CRF staff Courtney met during his internship remembered his unique intellectual tools and asked him to join them at their Key Largo, Florida, headquarters through December, when he plans to begin a master’s degree.

The guy with the interest in law and policy and the gift for public speaking is still there, educating and inspiring people. He just put on a wetsuit and, thanks to Samford mentors, discovered that a career in the ocean is not such a far-fetched idea after all. “Being at Samford has given me the ability to be Forrest,” Courtney said, “and from that, I’ve figured out that I love things I had no idea I could be passionate about and which have totally taken over my life.”

“Forrest is a brilliant example of what Howard College of Arts and Sciences can do for curious, hard-working students who want to find their vocational niche, but don’t necessarily have a traditional path in mind,” said Speights-Binet, chair of the Department of Geography and Sociology. “We are excited to see what Forrest can do with his Samford geography degree. The possibilities are endless.”