A group of students and faculty use a new collaborative community-based learning initiative to help residents of a rural Alabama county.
Published on June 14, 2017 by Philip Poole   Share this on: 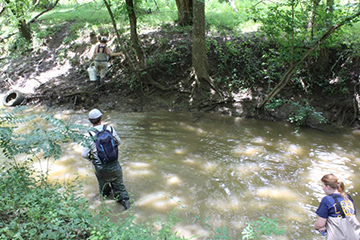 On a warm, humid day in rural Perry County, Alabama, a group of Samford University and Judson College students and faculty don waders before they slide down a muddy bank to collect samples from a roadside water source.

Both the Alabama River Alliance and Uniontown, Alabama, families residing near the town’s city-owned spray field requested a closer look at the water quality of a creek near the spray field.

Dobbins and Casiday serve as the Mann Center’s inaugural faculty fellows in community-based learning. After participating in a yearlong faculty development program in service learning, they worked closely with the Mann Center to develop the course, engage local leaders and organizations, and arrange for the students’ weeklong field experience as a key assignment for the summer course.

Casiday explained the project emerged when residents around Uniontown expressed concern regarding a possible health hazard involving spray fields designed to treat sewage. Because Uniontown does not have a municipal water system and many people cannot have septic tanks because of the soil in the area, spray fields in remote areas often are used to treat sewage.

“The hope is that the water being sprayed will percolate through the soil as a way of treating it,” Casiday said, but residents have expressed concerns that the sewage might be “spilling into public water ways.”

Deion Pierre, a senior public health major from Miramar, Florida, said the experience of helping others was “amazing.”

“You hope there is nothing wrong, but if there is, what we are doing [might] start something wonderful,” he said.

The notes must be detailed enough so that someone not directly involved with the sampling can read and interpret them, Casiday explained.

When interviewed, several families living near the spray field requested that students also collect water samples from septic tanks and wells on their properties to determine if the water might test positive for strains of bacteria often caused by exposure to untreated sewage.

After collecting water at several sites, the students tested the samples in Judson College’s microbiology lab alongside Judson biology professor Chris McConnell and some of his students. As part of the final assignment, Samford students will develop a report detailing their findings to share later this summer and in the fall with the affected communities, and with other students and faculty on Samford’s campus.

Casiday added that as a community partner, the Alabama Rivers Alliance might be able to use some of the data collected as part of the course to help with statewide initiatives regarding the public’s right to know about sewage spills in public waterways.

“The students got a lot of real- world experience with these issues that are impacting people in our state,” she said. “They are having the experience of interviewing residents who are directly impacted by this and learning about life in a part of Alabama that is different from what we have at Samford.”