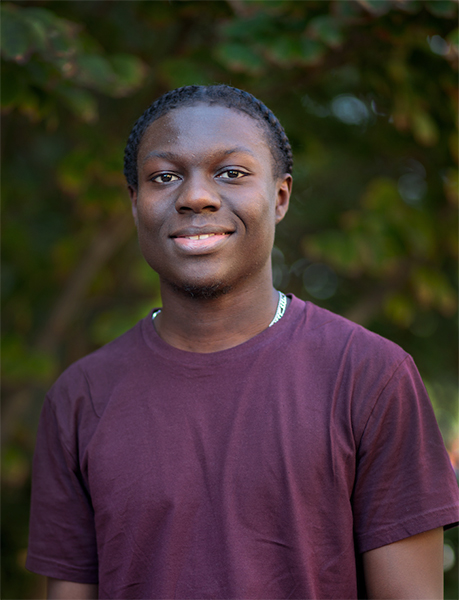 Computer science senior Roland Burks has packed a lot of experience into a short time at Samford University. As he completed a two-year degree at Lawson State Community College and considered his next steps, he learned about Samford’s STEM Scholars, a National Science Foundation-supported program that provides scholarships to help academically gifted transfer students complete a four-year degree in science, technology, engineering or mathematics.

Burks earned acceptance to Samford’s program and began a life-changing experience. It was a tough transition, he said, especially in the first semester. But faculty mentors including Betsy Dobbins, Malia Fincher, Steve Donaldson, Brian Toone and Greg Kawell encouraged him to develop original research and guided him to career-focused opportunities. “One door leads to another one,” he said. In the last half-year alone, those doors led him to a Research Experience for Undergraduates (REU) internship at Old Dominion University, two professional journal publications and presentation of his research at multiple academic conferences.

The summer research experience immersed Burks in cutting-edge exploration of remote sensing and cybersecurity. The latter was of special interest, and helped him and his research partners develop a way to train computer networks to mitigate malware attacks. Networks can’t identify threats from sources they haven’t previously experienced. They have to learn through controlled exposure to malware, but that’s easier said than done. “You can classify malware now, but some of the malware samples are underrepresented,” Burks explained. In the data set his team used to develop their project, some of the malware families had 3,000 samples, while some had less than 80. “It’s going to be hard to train a network with those margins,” he said, because networks will be biased toward large samples. His project reduced the disparities, significantly improving a network’s ability to detect malware. The need for such work is increasing daily as individuals and public and private entities face a rising tide of costly and catastrophic cybercrime.

Burks, currently a Big Data intern for the BBVA banking corporation, hopes to pursue a career in research after earning a Ph.D. (his top graduate school choices are Harvard University, Purdue University, University of Alabama-Birmingham and the University of South Carolina). With those goals in sight now, he reflected on how his brief, but rich, experience at Samford has prepared him even beyond the skills and knowledge of his discipline. “I wouldn’t trade it for anything in the world,” he said. “Not only have they allowed to me grow as a student, they’ve helped me to grow as a person. They teach you the materials you need for the work world, but they also teach you how to find yourself. That’s more important than anything a book can teach you.”