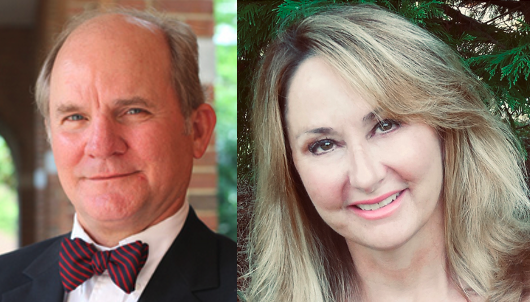 Howard College of Arts and Sciences professors received two of Samford University’s top faculty honors at the opening convocation of the spring semester in January.

Rhonda Parker, a professor in the Department of Communication and Media, earned the George Macon Memorial Award, given annually to a faculty member who through outstanding performance as a teacher, as a counselor, and as a friend to students demonstrates the ability to inspire students to greatness. Parker joined Samford’s faculty in 2002. In addition to her research and teaching on interpersonal communication in intimate relationships, she has inspired generations of students she finds unique to Samford. Parker says she has taught at several universities, but none rival Samford in terms of the quality of education students receive, or the strong community network that enables them to grow and learn in a caring, supportive environment.

Dennis Sansom, professor and chair of the Department of Classics and Philosophy, earned the Jennings B. Marshall Award for University Service, given to full-time faculty members who have made significant and sustained service contributions to the university during their career at Samford University. Sansom plans to retire at the end of this year after a career of more than 30 years. He joined the faculty in 1988 and served as chair of the Philosophy Department from its founding in 2000 through its merger with the Classics Department in 2020. He teaches a wide range of classes but focuses on ethics.